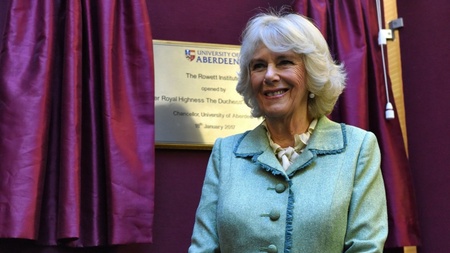 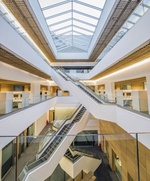 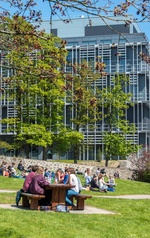 From rationing during the Second World War to working out the dietary requirements of cities under siege, the University of Aberdeen's Rowett Institute has been at the forefront of nutritional science for more than a century

It grew from humble beginnings with just four staff in a single laboratory to become an international leader in food-related research.

The Duchess of Rothesay officially opened the Institute's new state-of-the-art facility at the University of Aberdeen’s Foresterhill campus.

During Her Royal Highness's tour, The Duchess met staff, students and study volunteers, and heard about just some of the vital research taking place at the institute.

The Duchess was shown around the new Human Nutrition Unit (HNU), which has been equipped to the highest standards and ranks among the best facilities in Europe. Her Royal Highness also saw the ‘bod pod’ in action - a machine which measures body composition - as well as various specialist laboratories and consultation rooms.

Rowett scientists were also on hand to discuss their work on a wide range of topics, from whether it is possible to influence the taste buds of babies while they are still in the womb; to whether we can stop unhealthy food choices, such as too much sugar consumption, becoming a ‘habit’. The Duchess even heard about the possibility of creating a healthier scotch pie!

Rowett Institute Director, Professor Peter Morgan, said: “I am absolutely delighted that we are officially opening this wonderful new building. The Rowett Institute has been a leading force in nutrition research for many years, and as time has gone on, the importance of creating a world class facility to match our global reputation has been paramount.

The Rowett Institute has been a leading force in nutrition research for many years, and as time has gone on, the importance of creating a world class facility to match our global reputation has been paramount." Professor Peter Morgan

“An essential part of being able to provide this fantastic new building was the underpinning funding the Rowett receives for research from the Scottish Government, specifically from the Rural and Environment Science and Analytical Services Directorate, and we are hugely grateful for their support.”

Deputy First Minister John Swinney said: “I am delighted that the Scottish Government has helped to enable these new state-of-the-art facilities through our investment of £12 million.

“Aberdeen is already at the very cutting edge of food and health-related research, contributing to Scotland’s global reputation for research excellence and attracting some of the brightest and best researchers from across the world.

“The Rowett Institute’s move into the University of Aberdeen and the establishment of a purpose-built Human Nutrition Unit, the most advanced facility of its kind in the UK, will build on this success, strengthening its capacity to pioneer new research and increasing its international competitiveness and opportunities for collaboration.”

University Principal and Vice Chancellor, Professor Sir Ian Diamond, commented: “This is an important day as it officially marks the start of a new chapter for the Rowett Institute.

“The Rowett has an incredible history and the breakthroughs in nutritional science being achieved by our scientists already play a crucial role in tackling the global health challenges of obesity, ageing and food security. This state of the art research building and centre of excellence can only further enhance this pioneering work.”