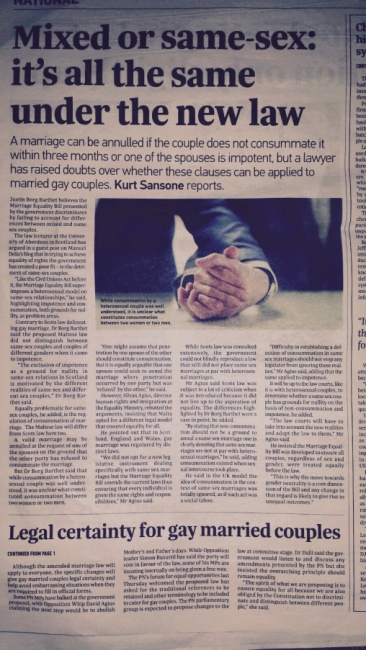 My earlier comment on the Maltese Marriage Equality Bill has prompted some discussion, including in an article in Sunday’s Times of Malta. In that article, Silvan Agius – a Maltese champion of LGBTIQ rights – responded on behalf of the Government of Malta.

Let me begin by identifying the common ground between that response and my own legal assessment. Mr Agius and I agree that a dynamic reading of fundamental rights law requires the elimination of all forms of discrimination on grounds of sexual orientation. This includes the right to marriage.

Contrary to his reading of my own argument, we also agree that foreign models should not be adopted blindly. Comparative law requires a critical approach to both/all relevant legal systems.

Our disagreement concerns the methods employed to achieve equality. This is a border skirmish between friends (literally and ideologically), not a fundamental dispute concerning the dignity and liberty of individuals.

I have no brief to defend or promote Scots law. Indeed, Maltese law is, in some respects, more progressive. By way of example, civil unions are gender neutral in Malta, whereas civil partnerships are open only to same-sex couples in Scotland.

Mr Agius was setting up a straw man when he stated that Malta could not ‘blindly reproduce’ Scots law’. Nowhere was this suggested. Maltese and Scots law are substantively different and require different solutions. Legal transposition should not, in principle, constitute ‘blind reproduction’.

Furthermore, the stated reasons for rejecting the Scots law model are far from persuasive. Mr Agius’ explanation rests on two limbs, both of which are unsound.

The first limb of his argument is that ‘in Scotland, England and Wales, gay marriage was regulated by distinct laws.’ This is neither here nor there, and indeed is not entirely accurate. The Marriage and Civil Partnership (Scotland) Act 2014 amends the Marriage (Scotland) Act 1977 with a view to opening the earlier Act up to same-sex couples. The appearance of a lack of consolidation is simply a function of different legal traditions.

Furthermore, nowhere do I argue that “non-consummation should not be a ground to annul a same sex marriage”. If I had, I would indeed have been arguing “that same sex marriages are not on par with heterosexual marriages”. Mine was a criticism concerning a lack of definition. Indeed, the position in Scotland – contrary to Mr Agius’ contention – is that the notion of consummation simply is not addressed in its own right for couples of either gender-mix. The problem does not arise in the same manner.

Again, I do not suggest that this should be the position in Malta. I am simply arguing that the Maltese position is unsound. Consummation has a specific meaning which should either be changed for all couples or adapted for same-sex couples.

I was also somewhat surprised to read the Maltese government’s claim that ‘Scots law was consulted extensively’. Extensive consultation should include deep engagement with reports and consultations conducted abroad, not mere skimming of the surface. Had the Maltese government indeed consulted Scots law extensively, they would have been aware that sex was not ignored at all when marriage equality was adopted.

Far from homosexual sex being taboo, the subject was debated in some depth with a view to identifying adequate solutions. It was agreed that superimposing established opposite-sex norms concerning impotency simply could not work. This required careful consideration of sexual interactions, as opposed to sweeping this fundamental dimension of married life under the carpet, as has been done in Malta.

The decision was made to defer discussion concerning impotency for different sex couples, but to adopt a more liberal approach for same-sex couples. This was not because the legislator shied away from the reality of homosexual relationships, but because the legal ramifications had been carefully considered.

Now, Mr Agius is right to note that this has been subject to some criticism in Scotland, but it does not follow that the Maltese solution is adequate. Indeed, by retaining impotence as a ground of nullity unchanged for same-sex couples, Malta is simply choosing discrimination in practice for the sake of political sloganeering.

Abdication of Parliamentary responsibility: “The law courts will have to take into account the new realities and adapt the law to them”

The Maltese Government claims that the decision not to distinguish between the organic interactions of same-sex and different sex couples stems from a desire to preserve the unity of marriage. Yet the government response to my earlier comment contradicts this claim.

Secondly, Mr Agius’ argument is a quite extraordinary admission that Parliament intends to leave a lacuna in the law which it expects the courts to address. To put it mildly, this is a somewhat idiosyncratic approach to the separation of powers. It is for Parliament, not the courts, to deal with the finer detail of family law policy.

But Mr Agius’ suggestion also misses a fundamental point about judicial legal development.   To the extent that courts did in fact elaborate the meaning of impotence and consummation for opposite sex couples, they had a wealth of comparable international experience on which to rely. Marriage law in Malta is, after all, derived from ecclesiastical sources. In contrast, same-sex relationships will not benefit from much international experience.

Furthermore, where there is international precedent, this is not necessarily relevant because regulation of same-sex relationships, novel as it is, differs from one jurisdiction to another. Indeed, Malta’s major parent legal systems, namely English common law, French civil law and Italian law, now regulate marriage quite differently to the contemporary Maltese approach. International precedent is simply unavailable, and Maltese same-sex couples will therefore have to rely on courts which lack the critical mass to develop solutions as predictably as one might expect.

Effectively, then my earlier suggestion that same-sex couples will be subjected to a lack of legal certainty, and in some cases to costly (both financially and emotionally) litigation remains sound. Indeed, it is implicitly confirmed by the Maltese Government that this transfer of the burden of regulation is intended by the legislator.

I remain of the view, therefore, that the Maltese legislator should engage more carefully with ongoing legal developments and consult in a greater spirit of openness. This will enable the better fulfilment of the declared aims of the legislation. It may also enable the legislator to address other unintended consequences, such as the discriminatory treatment of conversion of civil unions and marriages (while civil unions may become marriages, existing marriages cannot be converted to civil unions – a somewhat regressive approach – but more on that later…).