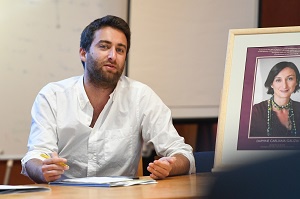 It isn’t good form to say this, but I’m delighted to report that the Centre for Private International Law’s workshop on Reform of EU Defamation Law was quite the success. We were joined in Aberdeen by “an all-star lineup of speakers”, eager to explore and address the mechanisms which some powerful actors use to suppress investigative journalism.

The discussions were prompted by an increasing awareness of how private international law rules can be abused to undermine fundamental rights within the European Union. The interaction of legal systems can, on occasion, result in such power asymmetries as to fundamentally deny the media’s right to a day in court.

The mechanisms whereby this is achieved are quite straightforward:

It all begins with journalists doing their jobs. They conduct research, they ask questions, and they write; the public is informed of their discoveries, in some cases with devastating clarity, and in matters of fundamental importance to the functioning of democracies and markets.

What often happens next is the disturbing part. Lawyers send letters to journalists demanding the retraction, alteration or deletion of online content. In some cases, they list dozens of articles which they require to be changed. Sometimes, journalists acquiesce in those demands. Those who do not acquiesce stand alone, and become easy targets for anyone who wishes to silence them by other means.

A number of missteps in the design of private international law rules in defamation cases necessitate this acquiescence.  In the first place, the decision concerning where to initiate proceedings is taken by the person instituting a case. The Brussels I Regulation allows a number of choices of forum and strategy which immediately put the respondent on the back foot.

Pursuers will, in most cases, have an arguable case that a defamation claim concerning online reports could be heard in any member state of the European Union, and elsewhere.  Consider the expense of a lawsuit in London, for example, and contrast this with the financial position of a freelance investigative journalist or a cash-poor media house elsewhere in Europe. The cost of litigation alone is enough to persuade some media houses to simply submit to demands which they might consider to be outrageous, and of no legal merit.

The problems are exacerbated by a lack of harmonisation of choice of law and substantive rules.  Essentially, the journalist cannot predict (i) where a case will be heard, or (ii) which substantive law (or laws) will apply to a claim.  Exposure to every legal system’s defamation laws, with no supranationally agreed minimum standards, moves journalists to apply the lowest common denominator of freedom of speech.

The situation is deeply disturbing when considered in the context of the role of free speech in any democracy and functioning legal system. Indeed, the very foundation of EU law, for example, is that individuals are required to hold powerful actors to account; that public authorities do not suffice to ensure the application of the letter of the law, or the functioning of a legal system governed by the rule of law.  This promise is woefully unfulfilled in respect of defamation law.

A working paper on “The Brussels I Regulation as an instrument for the undermining of press freedoms and the rule of law: an urgent call for reform” will be published shortly.

The discussions at the workshop have informed advocacy work by Reporters Without Borders (see here), and been the subject of news coverage (e.g. here, here, here, here and here)