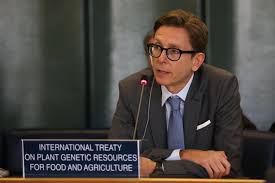 Following his thought-provoking talk delivered at the University of Aberdeen on 4 February 2020, Daniele Manzella, an international development lawyer, currently serving the Food and Agriculture Organisation of the United Nations, provides personal insights into the intersections of law and genome editing in agriculture. Daniele has advised several developing countries on laws and policies, on themes at the crossroads of trade, environment and agriculture. He has worked with international organisations within and outside of the United Nations system as well as academic institutions and pharmaceutical companies. He holds an LLM from the University of London and a PhD from the University of Macerata.

Titilayo Adebola (TA): One of your research interests is genome editing in agriculture. Can you discuss this?

Daniele Manzella (DM): Genome editing tools enable the targeted modification of an organism’s genome. In crop research and development, these tools are utilised in a wide variety of species for genetic improvement. There is increased hype around genome editing in publications. What has attracted me to this subject is, on the one hand, the ground-breaking scientific promises on genome editing, and on the other hand, the tendency to defuse societal issues. It is a paradox. Some science sectors describe genome editing as having incredible potentials to revolutionise life sciences and positively contribute to our human experience. Thus, the scientists welcome the hype. But, reasonably, the hype cannot come without public scrutiny and questions about safety, sustainability and equity, which scientists of dominant disciplines often dismiss as ill-founded or political.

As a lawyer with interests in social sciences, the question I ask myself is how to avoid getting entangled in the controversies that the previous generation of biotechnology innovation has left substantially unresolved. In other words, how do we move away from the polarised discussions around emerging technologies? I refer to polarised discussions because so far, the majority of opinion papers on genome editing tend to reduce the tensions that exist to a binary, or confrontational choice. For example, natural versus unnatural, science versus anti-science, rational behaviour versus irrational behaviour. These are some of the polarisations that Selim Louafi of Centre de Coopération Internationale en Recherche Agronomique pour le Développement (CIRAD), has punctually detected in his work. Together with Selim and Professor Eric Welch of Arizona State University, to both of whom I credit this approach, we try to stay away from these binary and confrontational discussions and understand complexities with a pluralistic perspective.

TA: Can you discuss the international legal landscape for genome editing in agriculture?

DM: There is no single legal framework that covers the entirety of genome editing in agriculture. I can characterise the international governance and regulatory landscape in three components: safety, innovation and equity.

To assess the safety of genome editing products or processes, the trigger of regulation is whether genome editing products are classified as genetically modified organisms (GMOs) in the legal sense and as such, whether they are covered by applicable legislation. The international instruments of reference are the World Trade Organisation’s (WTO) Agreement on the Application of Sanitary and Phytosanitary Measures (SPS Agreement), the Agreement on Technical Barriers to Trade (TBT Agreement), and the Cartagena Protocol on Biosafety to the Convention on Biological Diversity (Cartagena Protocol). The SPS and TBT Agreements harmonise national safety and other technical measures, as potential barriers to trade. The WTO Agreements require measures to be based on scientific assessments and be non-discriminatory. The Cartagena Protocol regulates the transboundary movements of living modified organisms (LMOs). While the WTO Agreements do not embrace the so-called precautionary principle, on the contrary, the Cartagena Protocol, in the absence of conclusive scientific evidence, still allows for States to take a precautionary approach to the import of LMOs.

Intellectual property (IP) is a primary driver of innovation trajectories and is a core component of a viable approach to regulation of technology by governments. In the aftermath of this new wave of technology, IP lawyers question the actual legal regimes in terms of stifling the efficient deployment of innovative genome editing technology and resulting products.  In addition, questions over the socio-economic and ethical implications of the patentability of plants, plant traits and genome editing technologies are resurfacing.  The relevant international instruments in the area of IP include the WTO’s Agreement on Trade-Related Aspects of Intellectual Property Rights (TRIPS). TRIPS harmonises national IP standards. Different IP tools are relevant when we discuss innovation in genome editing in agriculture. These include patents, sui generis plant variety protection, and trade secrets, which is an emerging tool to protect proprietary assets generated in the genome editing innovation process.

Regarding equity, as genome editing relies heavily on data extracted from genetic resources, some governments consider such genetic resources as already regulated through fairness-oriented mechanisms, revolving around access and benefit-sharing and its two pillars, prior informed consent and mutually agreed terms. In the views of some, allowing free and unrestricted recourse to the data extracted from genetic resources and deposited in databases without any form of compensation or immediate benefit flowing back to, for instance, farmers in the Global South, who have been maintaining and enriching biodiversity on the field for centuries, is equivalent to bypassing access and benefit-sharing. The relevant international instruments of reference are the Nagoya Protocol on Access to Genetic Resources and the Fair and Equitable Sharing of Benefits Arising from their Utilisation to the Convention on Biological Diversity (Nagoya Protocol), the International Treaty on Plant Genetic Resources for Food and Agriculture (ITPGRFA), alongside with other specialised access and benefit sharing instruments.

The current data explosion puts these access and benefit-sharing instruments under a heavy stress test. If science and the commercial application of scientific findings can work autonomously with data, without much, if any at all, access to physical materials from which the data is extracted,  access and benefit-sharing, that is, a regulatory area triggered by access or utilisation of physical materials - for example, crop germplasm samples in genebanks - runs a serious risk of marginalisation. The discussions on monetary and non-monetary benefit sharing in access and benefit-sharing forums may not capture the multiple innovation trajectories that big data generate and the actual benefits that genome editing produces.

A critical point to convey concerning the international legal landscape is that in each of the three components - safety, innovation and equity - there is no prevalent interpretation of the international legal instruments. If we look at the broader governance and regulatory structures, there is a high degree of heterogeneity in approaches. Is the current level of fragmentation tolerable, for example, for industry, public research, or do we need a new, consensual framework to generate some level of harmonisation? In other words, are we dealing with a “new” technology that is so distant from what we have regulated so far? Or, can we work within each of the three areas to accommodate evolving issues?

So far, the lack of uniformity is reflected in the variations in national regulations. For example, for the safety component, the United States regulators adopt a product-trigger approach and generally regard genome edited products as having non-regulated status under the existing legislation. Canada follows a similar approach whereby regulators consider the novelty of the trait in question on a case-by-case basis, regardless of the technology applied. In the European Union, the Court of Justice of the European Union has ruled that organisms created using gene-editing techniques such as transgenic plants are to be classified as GMOs, with the exception of conventionally obtained mutants. Argentina has been the first country to apply process based regulation.

In general, we can infer that the differences that exist in the regulation of GMOs and biotechnology also influence the approaches to genome editing.

TA: Can you discuss the central (law-related) debates on genome editing?

DM: As Selim Louafi nicely puts it, the central debates on this subject revolve around the ‘what’, ‘who’ and ‘how.’

For example, for safety, ‘what’ should we govern? Should we assess the technology itself, that is the method or process, or should we protect the product, which is the outcome of the said technology? When we look at national regulations, we see that countries are divided over this question. Some regulate the technology; others regulate the product. Some conclude that there is no need to regulate at all; others conclude that the existing GMO regulatory frameworks apply. The ‘what’ conundrum extends to equity. Should access and benefit-sharing be maintained within its original scope, that is, genetic resources, or encompass data in order to meet fairness objectives?

The second debate is about ‘who’ should govern. Here, I want to revisit one of the aforementioned binary confrontations, science versus anti-science. Some suggest that regulators should listen to scientists and make decisions based on their advice. But what is science? What are the different disciplines that constitute science, or that have the legitimacy to be defined as science? Also, if you consider governance, should the processes be exclusively earmarked for experts? Should the public be involved and to what extent? There are a considerable differentiation and gradation of possible mechanisms that can accommodate multiple disciplines and viewpoints, including hybrid participation in advisory panels. Enclosing advice and the resulting decision-making to a limited set of scientific disciplines may ultimately hamper the actual objectives and goals that science pursues.

The third debate about ‘how’ to regulate revolves around the pillar of risk assessment. Is a risk-based assessment enough to capture the multi-dimensional challenges that genome editing poses? Or, should regulators open up to fully integrated socio-economic assessments embracing factors such as innovation and competition, food security and sustainable agriculture?

TA: Based on these tripartite debates and your research, what changes to the legal landscape for genome editing would you like to see at the international, regional or national levels?

DM: It is an overly-ambitious question as I have no capacity to influence. But, let us imagine for one second. The two changes I would like to see are the following. First, I would like to see more scientists and regulators become aware of one existing limit of the current regulatory mechanisms, which is the absence, or the downplay, of accountability. Accountability to societal objectives is as important as the traditional evaluations of safety, efficiency and efficacy. Accountability leads us to consider the public justification of science and technology. In the past, GMOs have encountered resistance because the public justification of science and technology was either taken for granted or considered marginal. In genome editing, we need to build such a public justification out of inclusive, participatory governance, and not just wait for ex-post impact assessment.

The second change I would like to see is attributing more importance to self-regulatory entities and mechanisms. Genome editing should not be all about statutory regulation. There are multiple self-regulatory mechanisms - for example, voluntary guidelines, standards, codes of conduct - that could embark on experimenting new solutions and represent an important contribution to advance a progressive and holistic regulation of genome editing.