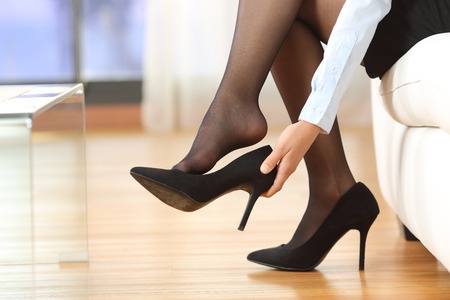 In April 2017, a petition to make it illegal for employers to force women to wear high heels in line with corporate dress codes was rejected by the UK government. It was deemed that existing equality legislation – the Equality Act 2010 – is sufficient to protect women from the widespread discrimination they face in the workplace in respect of their footwear choices, or lack thereof.

This week, a fresh call was issued following the most comprehensive review of evidence of the health risks and social benefits surrounding high heel wearing, which was published in the journal BMC Public Health. The study was led by Dr Max Barnish and found that there is a clear link between high heels and poor health outcomes, and therefore no person should be compelled to wear them in the workplace or other settings.

The publication of this research sparked mass press coverage across the UK and internationally. Heated public TV and radio debates followed, including appearances of the University of Aberdeen researchers who undertook the review. Dr Heather Morgan, a health services researcher and Aberdeen law graduate who co-authored the study, said: “women’s health should not be exploited in favour of commercial branding. This is not just an issue of equality and discrimination, but of health and safety at work.”

Dr Barnish continued: “Our review demonstrates a need for this issue to be taken more seriously by either the UK or its devolved governments. We know that many employers continue to compel women to adhere to strict dress codes, which often include a requirement to wear heels. Existing legislation might imply that this is illegal, but the law is not frequently or easily enforced. Meanwhile, heels continue to cause wearers pain, long-term physical damage and injury, which could easily be prevented.”

The researchers have made it clear that they are not trying to tell people what they can and can’t wear: choice is key, particularly because the review also identified numerous social benefits that wearing heels might afford women, which come about through heteronormative standards and expectations. Those are for another discussion; however, from a legal perspective, when health is put at risk, which the evidence here shows in no uncertain terms, employers have a duty of care towards their employees.

Dr Morgan added: “It is ludicrous that employers can and do enforce terms of a contract of employment that might put the health and safety of their staff at risk. Our work has now shown that this is the case. The law in this area as it stands remains difficult to enforce because it relies on proving discrimination on the grounds of sex (i.e. if females are required to wear heels, proving that male colleagues are not). While that is important and should remain an option for employees, we believe that a concrete rule banning enforced high heel wear at work (or in other settings) must be enacted – on public health grounds.”