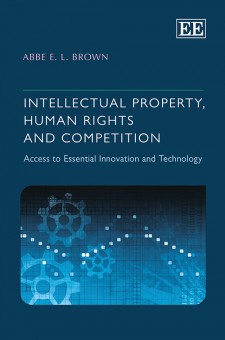 The prospect of the UK leaving the EU has, as already explored elsewhere on this blog, significant legal implications. So too would the possible repeal of the Human Rights Act 1998, perhaps to be replaced by a Bill of Rights.  One implication relates to proposals I put forward in my 2012 monograph Access to Essential Innovation and Technology: Intellectual Property, Human Rights and Competition.

These three legal fields of intellectual property (“IP”), human rights and competition were combined in the book as they can be relevant to questions of access to technologies from different perspectives.

It is of course possible for these three fields to co-exist and complement each other: IP develops medicines to further the right to life and rewards the activities of innovators, and the ultimate goal of both IP and competition has been argued to be to encourage innovation. Yet conflict is possible; and this can be entrenched by the fact that within the UK jurisdictions there are significant differences in the extent to which each field can be the base of an action.

The book developed a means of enabling these three legal fields to be combined in judicial decision making in the UK, to deliver greater access to technology while still respecting the contribution which IP can make to developing innovation. At the heart of the book’s proposals are firstly a Human Rights Emphasis, which is a framework for enabling courts to consider the wide range of human rights relevant to a dispute to establish what is meant by delivering decisions (in light of the Human Rights Act 1998 and also EU fundamental rights) which are “consistent with human rights”; and secondly there is a new, human rights influenced, approach to the “Euro-defence” (a term explored in this resource from the law firm Slaughter and may (PDF)) and the case law on when refusal to license IP could be an abuse of a dominant position.  These two approaches could lead to courts, in some cases, finding that what seemed to be IP infringement from a pure IP law perspective was not in fact so.  The book then went on to argue that this approach was consistent with UK’s responsibilities to IP owners under the European Convention on Human Rights, and also obligations to protect IP under TRIPS, the IP element of the World Trade Organization  (“WTO”) Agreement. As a result, the approach and the UK would not be vulnerable to challenge at the European Court of Human Rights and through WTO dispute settlement.

The book develops its arguments through several scenarios, across health, communications, and the environment, with a range of outcomes depending on the facts. The proposals have been well reviewed (and also termed “possibly heretical” (Stothers 2013)) and stimulated wide interest among lawyers and IP owners, notably at the Licensing Executive Society International Conference in 2011.

Looking forward it does seem possible that there will be some sort of a Bill of Rights and also be some sort of competition law framework in post-Brexit UK, yet  in these new regimes human rights and competition may not have their present special legal status that has enabled the societal objectives (other than short term reward of innovation) to prevail.

My ongoing work (including blog posts of 26 November 2015, 2 May 2016, and 26 July 2016) explores how the interaction between legal fields can be further developed, including by looking beyond the Human Rights Act 1998 and EU competition law. (This could be serendipitous, given the current political situation.)  For now, the arguments developed remain a valuable tool for experimentation by lawyers and activists who are faced with IP obstacles to using technologies to pursue important goals.

This blog post is by Dr Abbe Brown, Reader.