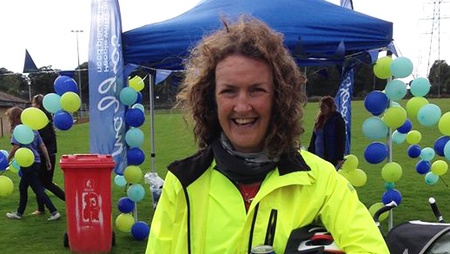 Whether abseiling down cliffs, taking to the catwalk for a charity fashion show or climbing Kilimanjaro, TV reporter Anne Smith has thrown herself head-first into fundraising since she was diagnosed with breast cancer nine years ago.

Her next big challenge will see her cycle the famous North Coast 500 along with University of Aberdeen staff to support the £4.5m effort to put a new world leading cancer team in place in the North-East.

As someone who was given the ‘all-clear’ (though she admits the term makes her extremely nervous) following her own brush with cancer, Anne knows only too well how important cancer research is. But whilst research made her cancer beatable, her main motivation for further fundraising is to help fund studies into the cancers that are harder to treat – including the type that her beloved older sister, Maggie, succumbed to three years ago.

“No sooner was I better than my sister was diagnosed with breast cancer,” Anne says, choking back tears. “She was the most gorgeous older sister in the world. And she was only 60.

“My heart sank when she told me the type of cancer it was - triple negative. I knew it was the more aggressive and rarer form of cancer and that they didn’t have the same range of successful treatment options as some of the other types of breast cancer.

“She was treated but it came back and sadly she was not so lucky. For me, that’s why the research is so important to me because I wouldn’t want anybody else to lose their sister.”

Whilst never a slouch before her diagnosis, ever since, keeping fit has been an important part of her life.

“I remember my consultant, Professor Steve Heys, telling me how important exercise is. Somewhere along the line it’s sunk in that I need to be fitter. I need to watch what I eat and drink just generally look after myself.”

Indeed it is Professor Heys, Head of the University of Aberdeen’s School of Medicine, Medical Sciences and Nutrition, who enlisted Anne to take part in the North Coast 500. The team of around 20 will attempt to cover the route from Inverness, around the North West coast up to John O’Groats and back again in eight days.

Since getting on a bike for the first time since she was 10 years old for a charity cycle from Inverness to Aberdeen (“I had to push the bike home after my first five mile training ride!”), Anne has become a two wheel convert and as a member of local women’s cycling group The Velodees has clocked up thousands of miles on her flashy Elite Boardman bike.

“Biking has opened up a whole new world to me,” she says. “I’m much stronger and fitter and I do all kind of charity rides. It’s all quite addictive. I’ve met so many new friends and had so many great adventures since joining the group and it seems funny to say it, but none of this would have happened if I hadn’t had cancer.”

The odd charity cycle is one thing, but how does one go about preparing for a 500 mile effort around some of Scotland’s most untamed coastline?

“I’ll tell you how you prepare – you just cycle non-stop!” Anne laughs. “I actually broke my collar bone in September in the Alps and I’m only 6 months past it and I’m at it again! I have been cycling as many days as I can since January and I can tell you, I have cycled on some bad days – snow, sleet, head winds, all for Professor Heys’ 500! I don’t mind though because I am very grateful to him for all sorts of different reasons and it is all for the greater good. We all do a little bit and it adds up.”

The team will be joined at the start of their journey by record breaking round-the-world cyclist Mark Beaumont who has also been giving them training tips.

“I have done a short part of the NC500 before – a nasty hill called Bealach na Bà in Applecross. It started off and I thought, ‘what’s all the fuss about?’, and then the gradient went to about 20% and I was just doing all I could to stay on my bike! Mark told us that some people think Bealach na Bà is the hardest bit and it’s ok after that – but he says that is definitely not the case! So he’s put the fear into me a bit with that, I have to say!

“My mantra during my cancer treatment was ‘business as usual’, I just wanted to keep on going. So hopefully that will see me through this next challenge. I’ll be the one in the group saying ‘just round the next corner…we’re almost there! Annoying the hell out of everyone!”

Anne and the University of Aberdeen team set off on their North Coast 500 cycle on May 19.

The virtual NC 500 challenge has already seen members of the School of Medicine, Medical Sciences and Nutrition and patient partners clock up more than 600 miles on the static bikes in Suttie Centre.