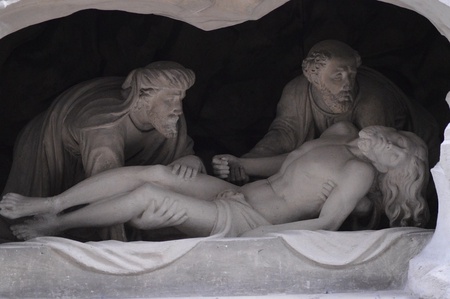 The Care in Funerals project is investigating what can be learned from disruptions to UK funeral provision during the COVID-19 pandemic, and from how people adapted to those disruptions. In this blog post, Jennie Riley and Vikki Entwistle focus on practices involving the dead body.

Dead human bodies have multiple meanings. Any particular body might be - all at once, and to several different people or to the same person - a beloved relative, a vessel for a soul embarking on its next stage of life, a source of forensic evidence, an object which is rapidly decaying, and more. These meanings both reflect and guide the multiple ways in which people interact with someone’s body after they die and up to the time of its burial or cremation. People with different beliefs and traditions have different ideas about the appropriate treatment of dead bodies. But few people consider it unimportant – which is one reason why so much anger was expressed toward British Prime Minister Boris Johnson when he allegedly said he would rather “let the bodies pile high in their thousands” than take the nation into another pandemic lockdown.

Family members or others who take responsibility for organising a funeral typically have significant discretion regarding: how a deceased person’s body is washed and prepared; what, if any, items of religious or personal significance (e.g. clothing, jewellery, gifts) are removed from or placed with it, whether, where and by whom the body is viewed, and when and where it is buried or cremated. Decisions will often be strongly influenced by religious beliefs and cultural norms. For example, many religious traditions specify burial or cremation, and place significant stock by the completion of rituals of washing, dressing and prayers which assist someone’s transition into the next life or the afterlife. In many cultures, community members combine a visit to witness and pay respects to the body of the person who died with an offering of condolence and support to bereaved family members. Well-established services and systems of practice often ensure that what is required is routinely enacted. In some cases, however, there may be no clear traditions of family or community involvement in preparing or viewing a body after death. Handling the body is widely delegated to health professionals and funeral directors, who are often implicitly trusted to do so appropriately – perhaps with no discussion of what might be appropriate.

During the COVID-19 pandemic, practices and options involving contact with or proximity to dead bodies were variously constrained by different combinations of regulatory provisions, death service providers’ decisions, logistical problems arising from high death rates and the introduction of temporary mortuaries, requirements for family members to self-isolate, and broader concerns about infection control. At the same time, awareness of practices of care and respect for the bodies of the dead increased, and for some their significance was heightened.

It is hard to articulate how painful and distressing restrictions on washing, dressing and viewing the bodies of people who had died were for many of those bereaved during the pandemic. Accounts of being unable to fulfil religious requirements, to perform last acts of intimate care for someone, to see and know someone had died, or to feel confident about burying or cremating the right person, were some of the most emotional parts of the interviews we conducted with bereaved individuals.

One participant described screaming down the phone at a funeral director who told her that her father’s body would have to be left in a body bag following his death from Covid-19. Not only was the reduction of her beloved father to a ‘bag’ a symbolic transformation she did not wish to entertain, she could not bear the prospect that he might not be sent off with the high standards of immaculate dress he had so keenly maintained in life. Another participant described not asking (because she did not want to contemplate) whether or not her father’s body had been washed and dressed before being placed in a coffin.

Extensive distress arose because bereaved families were prevented from visiting or viewing relatives’ bodies on funeral directors’ premises, or could only do so in household bubbles or with social distancing. When being disallowed from viewing a body in an open coffin followed traumatic experiences of a relative dying without family present, or was followed by a prohibition on touching a closed coffin during a funeral service, the sense of being denied ways of saying goodbye was often acutely painful, and for some exacerbated distress, guilt and grief.

It is important to note that most of the funeral directors we spoke with also reported having been conflicted and distressed when they needed to suspend or limit practices of washing, dressing and adorning a deceased person’s body, or to prohibit viewing by friends and relatives. These decisions went profoundly against the grain for many, and when not legally required were made out of significant concern for staff safety and the need to ensure some continuity of service provision through the pandemic.

Disruption is not the whole story. We have also heard stories of determined and creative adaptation to sustain care despite the constraints. Some Muslim organisations and funeral directors opted to use a dry form of ghusl (ritual wash for purification) approved as a legitimate adaptation by national and international Islamic scholars. Members of Jewish Chevra Khadisha adapted the ritual of tahara (ritual cleansing in preparation for burial) to ensure that water flowed only in one direction through a shroud, protecting those performing the washing from any bodily fluids. These and other adaptations, including systems to support the safe donning and doffing of PPE by volunteers were, in many cases, made initially by local groups in conversation with medical and public health experts. Some went on to invest significant time and money to share rigorously developed practices via online training. Two participants – one whose father was a Sikh, and another whose father was a Muslim – chose to have glass-topped coffins so that relatives and friends were able to view their fathers’ bodies safely. Others described funeral directors using smart phone cameras to provide reassurance of the identity or appearance of a dead person in their care and sometimes to facilitate remote viewings - practices that might previously have been used for family members living abroad, but which took on new significance with local social distancing requirements. Adaptations were also made to who participated. Some religious teams deliberately recruited new volunteers from younger demographics so that more vulnerable elders might be kept safe.

This brief account of disruption, distress and adaptation is far from complete, but we hope it illustrates the importance of supporting practices of caring for a body in death in ways that are mindful of their diverse significance, and their implications for the wellbeing of those still living.