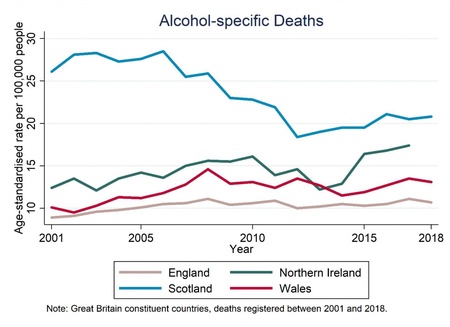 Minimum unit pricing (MUP) for alcohol was introduced in Scotland in May 2018 as part of the Scottish Government’s strategy to reduce the health and social harms associated with alcohol misuse. The graph below shows that for a long time Scotland has had the highest alcohol-specific death rate in the UK. It also shows that this rate had been falling up to 2012 but progress has stalled.

There is no single factor behind alcohol misuse but there has been increasing concern that the very low cost of some alcohol products sold in supermarkets and other off licence shops (off sales) could be making it harder to reduce hazardous and harmful levels of alcohol consumption. Minimum Unit Pricing allows a floor price to be set, currently 50p per unit of alcohol.

What does this mean in practice?

MUP is intended to increase the cost of cheap off sales alcohol and reduce the amount of alcohol consumed. However, it is likely that households will spend more on alcohol even though they are buying less. For example, a household that spent an average of £10 per week on off sales alcohol might find that the cost would go up to £11. They decide to buy a little less but spend a little more (60p) making the weekly cost £10.60

This would reduce the amount of money households have to spend on other things. As off sales alcohol is often bought in supermarkets along with food shopping, one possibility is that households will reduce food spending to keep the overall bill the same. Other researchers have found that an increase in alcohol price may have an effect on some food purchases.

The comparison with England is used to allow us to be more certain that any effects on purchasing behaviour that are observed are due to the policy and not due to other factors, such as food price rises, which are common to both areas. We will also look at the change in volume and type of food purchased to see if this becomes less healthy as households might buy less fruit and vegetables, for example. A less healthy diet could increase the risk of health problems such as those associated with foods high in fat, sugar and salt or with low consumption of fibre and oily fish.

Thanks to Professor Anne Ludbrook for her work developing this Blog post.