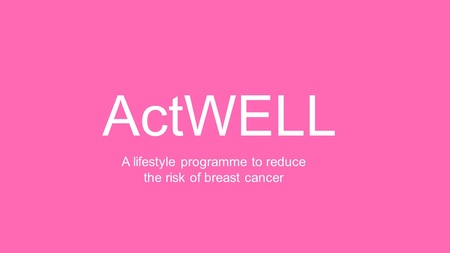 About 1 in 7 females are diagnosed with breast cancer during their lifetime. This makes breast cancer is the most common type of cancer in the UK.  In Scotland, cases of breast cancer are expected to rise by around 27% by 2030. Evidence suggests that breast cancer risk can be reduced by about 30% by lifestyle choices. One of the most important ways of doing this is by managing body weight through having a healthy diet and being physically active.

ActWELL is a lifestyle programme developed in Scotland, and funded by the Scottish Government, that encourages women to lose weight and increase physical activity. Women attending routine breast cancer screening clinics were given the chance to get free lifestyle advice from trained volunteer coaches.

In the ActWELL programme, women have two face-to-face sessions with a lifestyle coach from the Breast Cancer Now charity. This is followed up by nine telephone support sessions over the course of a year.

The coaches offer personalised advice on diet and physical activity. Behaviour change is encouraged through methods such as goal setting, self-monitoring, and coping plans. The programme was pilot tested and the initial results indicated significant differences in weight loss and increased physical activity amongst the women who took part. The ActWELL study randomised controlled trial has now been undertaken to assess if the programme made a difference.

The ActWELL study began in January 2017 and ran until December 2019. Women attending routine NHS Breast Screening clinics in Grampian, Tayside, Lothian and Greater Glasgow and Clyde were offered the chance to learn more about the programme. To take part in the study the women needed to be between 50 and 70 years old and be classed as overweight.

Volunteers who signed up attended an initial assessment. They were then divided randomly into two groups. One group took part in the ActWELL programme and the other group received standard care. Standard care involved receiving a leaflet, although follow-up advice was offered at the end of the trial period.

In total, 560 women took part in the study, with 279 women receiving the ActWELL programme. Assessments took place after 12 weeks and after 12 months. The main outcomes being studied are physical activity and weight loss. Other secondary measures are indicated on the trial registry. HERU were involved in the study as economic outcomes are being measured to assess the cost-effectiveness of the programme.

The full results including economic outcomes are not publicly available yet but it has been indicated that after 12 months, 83% of participants were still involved with the study, and 90% of the participants said they were likely to recommend the programme to others. The main finding however, is that the ACTWELL programme did help women of breast screening age to lose weight and the amount of weight lost after a year was of a magnitude likely to be helpful in reducing breast cancer risk.

The results of the ActWELL study have been analysed and submitted for publication. We’ll feature the publications on the HERU website when they are available.

There is more information on the ActWELL programme at the ActWELL website. The study is registered at ISRCTN 11057518 and published articles are detailed there.

Many thanks to Paul McNamee of HERU for his help developing this blog post.