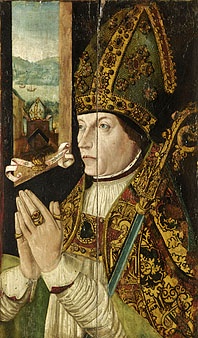 This exhibition marks the 500th anniversary of the death of the founder of the University of Aberdeen, William Elphinstone (1431 - 1514), and explores the impact of his life on the history of Scotland.

Elphinstone: Renaissance in the North

Elphinstone’s distinguished career, in which he excelled as statesman, diplomat, lawmaker and churchman, ensured that his legacy within the region and beyond was far-reaching.

Elphinstone commissioned major building and infrastructure work in Aberdeen, including the construction of King’s College Chapel and improvements to St Machar’s Cathedral, while every day, traffic still thunders across the bridge he endowed over the River Dee. In 1509, Elphinstone brought the first printing-press to Scotland, and was entrusted with the creation of a national prayer-book, the Aberdeen Breviary.  As Bishop of Aberdeen, he implemented a programme of much-needed reform. This dramatic reordering of his diocese, would lead to the foundation of what would become the University of Aberdeen.

Elphinstone was remembered with reverent affection within his diocese, with major relics of the bishop and his world surviving, including his portrait - the only surviving picture of an identifiable non-royal individual from the period. The exhibition features rare and fascinating artefacts of pre-Reformation Scottish art and culture.