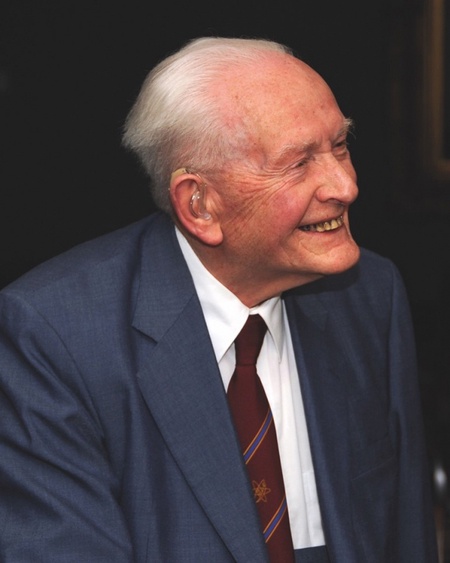 The pioneering medical physicist whose team led the world with their breakthroughs in medical imaging passed away at the end of February aged 94.

Professor John Mallard played a crucial role in the development of two of the world's most important medical technologies – Magnetic Resonance Imaging (MRI) and Nuclear Medicine Imaging which includes Positron Emission Tomography (PET). Under his leadership, a University of Aberdeen team built the first whole-body MRI scanner which Aberdeen clinicians used to carry out the world's first body scan of a patient. MRI is now used all over the world in the diagnosis and treatment of cancer, dementia, and other conditions and injuries.

Professor Mallard was also a champion of PET imaging even though the technology was still very much in its infancy at the time.

Appointed the University’s first Professor of Medical Physics in 1965, in his inaugural lecture shortly after joining Aberdeen, Professor Mallard predicted PET would become one of the most powerful tools for studying human diseases, which would prove correct.

Emeritus Professor Peter Sharp OBE, FRSE, who worked for Professor Mallard and became his successor, said: “Professor John Mallard played a major role in the development of Medical Physics. It is no understatement to say that hundreds of thousands of patients have benefited from his vision for medical imaging.”

Tributes have been paid to Professor Derek Ogston who died at the end of February aged 89.

A multiple and later an honorary graduate of the University, Professor Ogston became a member of teaching staff at the University in 1962, rising to become Dean of the Faculty of Medicine and Vice-Principal.

His last four years of service were as Senior Vice-Principal, and he played a major role in the University’s Quincentenary celebrations in 1995.

Professor Ogston was renowned for his support for students, particularly those studying music. A supporter of the Opera Society and the King’s College Chapel Choir, there are several Ogston Scholarships, as well as several Ogston awards and the prestigious Ogston Music Prize. In 2007 he was presented with an honorary degree from the University in recognition of his outstanding contribution.

University Principal Professor George Boyne said: “Derek’s contribution to the University over the decades was remarkable. As a valued colleague and supporter of our students, and we owe him a debt of gratitude for his many long years of service.

“His legacy lives on in the form of many awards, prizes and scholarships bearing his name that continue to support and inspire our music students. I’ll greatly miss seeing Derek on campus and at the many University events that he attended.”

The University community was greatly saddened to learn of the death of Ronnie Scott Brown, who passed away in the summer.

For many years Ronnie was a dedicated supporter of the University on many levels and will be remembered by everyone who knew him as a true gentleman and a wonderful person.

A proud alumnus of Aberdeen, Ronnie graduated MA in 1958 and LLB in 1960. During his time as a student he joined the Officer Training Corps where he learned to parachute and ski. He became an Honorary Graduate LLD in 1996 and was presented with the Benefactor to the University Award
in 2015.

A joint founder of Abtrust Fund Management Limited, which became Aberdeen Asset Management, his association with the University continued as a member of the University Court, the Business Committee, the Development Trust board and as an exceptionally generous supporter.

Anne Minto OBE, Chair of the University Development Trust, said: “Ronnie was an inspiration to both students and colleagues alike. His outstanding business acumen was combined with his personal integrity, unstinting generosity and genuine warmth.

"That beaming smile of Ronnie’s was always there to welcome people and make them feel included. We will all miss him so very much.”