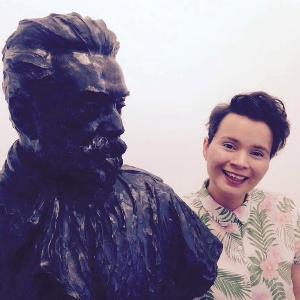 Dr Fern Insh, Research Fellow in History of Art, will feature on the final episode of Scotland: The Promised Land – a three-part series exploring Scotland's social and political changes in the years following World War One.

Fern will discuss the impact of war on the art of the Montrose-born sculptor William Lamb and, furthermore, the part which Lamb played in the cultural centre which Montrose became in the 1920s. The piece was filmed last summer whilst Fern was working as a Seasonal Curator at The William Lamb Memorial Studio.

William Lamb is one of Scotland's most under-appreciated artists. In the 1930s, Lamb had sculpture exhibited in the academies of Paris, London and Edinburgh. Furthermore, in 1932 he received a significant Royal Commission to sculpt the busts of the present Queen, her sister and the Queen Mother. A life of introversion, brought on by enduring horrors of World War 1, stifled Lamb's ability to self-promote. As a result, he never marketed himself enough to secure the recognition which he is worthy of.

Episode 3 of Scotland: The Promised Land (‘The Cultural Revolution’) airs at 9pm on Wednesday 6th of April, BBC2 Scotland. For further details, follow the link: http://www.bbc.co.uk/programmes/b076v8kd