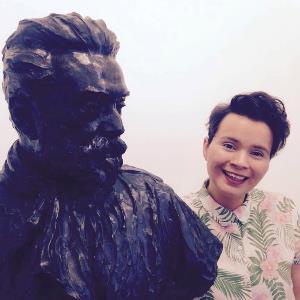 Congratulations to Dr Fern Insh, Teaching Fellow in History of Art, who has been awarded a Travel Grant from the Society for Renaissance Studies in Scotland.

These grants are awarded annually to two early career researchers working in Scotland who specialise in Renaissance studies.

Fern received the award to present a paper called Monumental Passings: Exploring and Analysing the Design of Seventeenth-Century Scottish Tombs. The paper demonstrates that the design of seventeenth-century Scottish tombs was more complex than current literature would convey. Specifically, the paper explains that tombs of this era were part of a wider post-Reformation visual culture in which spatial arrangement was the key to interpreting images.

Fern will present at Death and Identity in Scotland from the Medieval to the Modern: Beliefs, Attitudes and Practices at the University of Edinburgh on Saturday 30th January, 2016. For more details on the conference, click here: http://www.ed.ac.uk/divinity/news-events/events/death-and-identity-in-scotland-from-the-medieval-t