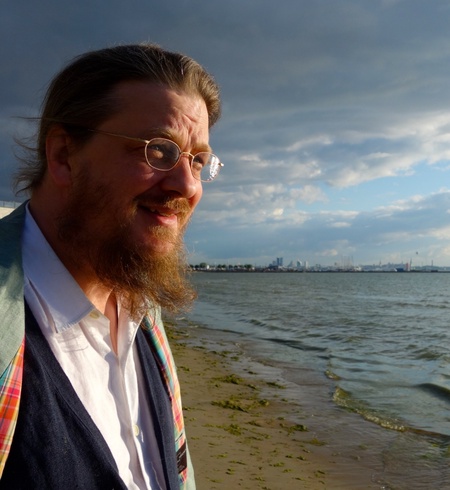 Prior to holding the Regius Chair in Humanity at the University of Aberdeen, I spent twenty-five years teaching at St Vladimir’s Seminary in New York, where I also served as Dean for a decade. I have taught at other schools in the US, such as Harvard Divinity and Fordham University, and as the Metropolitan Kallistos Chair of Orthodox Theology at the Vrije Universiteit of Amsterdam. Metropolitan Kallistos was my doctoral supervisor at Oxford University, where, after studying philosophy in London, I researched the topic of asceticism and anthropology in Irenaeus of Lyons and Clement of Alexandria (published by OUP 2000). After a decade of teaching in most areas of early Christian and Byzantine studies, I began the publication of a series entitled The Formation of Christian Theology (The Way to Nicaea and The Nicene Faith, SVS Press 2001, 2003). In preparation for further volumes, I edited and translated the Greek, Latin, Syriac, and Armenian fragments of Diodore of Tarsus and Theodore of Mopsuestia, setting them in their historical and theological context (The Case Against Diodore and Theodore: Texts and their Contexts OUP 2011). However, realizing that to go further into the sixth century also meant returning to, and reconsidering, Origen, I prepared a new edition and translation of his work On First Principles together with an extensive introduction (OUP 2017). Having also completed a full study of Irenaeus a few years earlier (Irenaeus of Lyons: Identifying Christianity, OUP 2013), I was drawn yet further back, to the Gospel of John (John the Theologian and his Paschal Gospel: A Prologue to Theology, OUP 2019), putting my findings from decades of research on the early Christian writers, as the earliest readers of John, into dialogue with contemporary readers of John, both scriptural scholars and also, returning to my earlier studies, the French Phenomenologist Michel Henry, as an act of constructive theology.

I am particularly fascinated by the relationship between scriptural exegesis and theological reflection in the development of the theological discourse in the early centuries and in contemporary theology, the relationship between theology and anthropology, and the place of death (and life!) in both, and by texts and all that is required to learn how to read them—the transmission of texts in manuscripts, the economy of a text and its paratexts, and hermeneutical issues more generally. I am currently working on an edition and translation of Gregory of Nyssa’s On the Formation of the Human Being, and more long term a new edition and translation of the works of Irenaeus of Lyons, while also working on various book projects on Christology, ecclesiology, and anthropology.

I am happy to accept doctoral students in Patristics, especially Greek and Oriental, and Byzantine studies, Johannine studies, modern Orthodox theology, and phenomenological and hermeneutical approaches to theology.