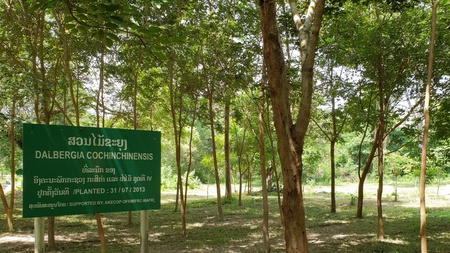 Have you ever heard of Rosewood?

Rosewood refers to some of the most valuable timber species on Earth, most species belonging to the genus Dalbergia which is in the bean family (Fabaceae). The high value of the beautiful brown and reddish veneer of the timber (used for luxury wood products) has led to an expansion of demand and subsequent overexploitation of the species, and reduction of its range. In 2014 the Environmental Investigation Agency observed more than 400 tonnes of timber reaching a warehouse in Vietnam in one day, and they estimated the market price of Siamese rosewood in China at £45,000 per cubic metre (in 2017). The increased rarity, and the spike in its market price, have caused an overwhelming surge in the illegal timber trade. In Thailand, in an effort to protect their last standing trees, rangers are patrolling national parks continuously day and night, every day of the year. These species are considered so endangered that the entire genus Dalbergia was given CITES Appendix II protection in 2017 (i.e. restricting its international trade).

One way to relieve pressure from wild tree populations is to plant them in restoration and plantation projects, as well as to increase the number of planted trees on private land. Many countries, including Cambodia and Laos, are now promoting seed collection in community forests as a method of stimulating livelihood opportunities in rural areas. Considering that the average household income in Laos is just £60 per month, rural communities could benefit immensely from selling Dalbergia seeds; in fact, it is estimated that 1 kg of Dalbergia cochinchinensis seeds can be sold for up to £200!

As countries commit to initiatives for restoring ecosystem services, there is an increased demand for the seeds and seedlings of native trees. Ensuring the long-term success of restoration requires that the planted populations should remain genetically viable and possess the capacity to adapt to future climate change, which requires that a sufficient quantity and quality of planting material is available.

Unfortunately, there are problems in the seed supply chain for native tree species in many countries. One of the biggest issues faced by resource planners is that relict populations are often highly fragmented. Habitat fragmentation creates a barrier to movement that decreases the number of cross-pollination events between trees, which may reduce fruit production and lower the genetic diversity of the fruits that are produced. Fragmentation also creates logistical challenges for seed collectors. When trees are very distant one from another, villagers and farmers might decide to collect seeds only from the few remaining trees on their own load, which increases in the likelihood that the seeds provided for restoration projects are genetically depauperate or even inbred.

My research focuses on the viability of seed production of Dalbergia populations in Laos and barriers to the seed supply chain for restoration projects. The ultimate aim of my study is to generate knowledge that will improve the seed supply chain for these species as thereby enhance their conservation. Furthermore, it could enhance the livelihoods of local communities by helping them improve the quality of seeds traded in the market and thereby increase the market price.

My PhD research is part of the project “Conserving Rosewood genetic diversity for resilient livelihoods in the Mekong”. This project is funded by the UK Darwin Initiative, coordinated by the University of Oxford and implemented with forestry authorities and research organisations from Cambodia, Lao PDR, Thailand, Vietnam and China, the Alliance of Bioversity International and CIAT, the University of Copenhagen and the University of Aberdeen.