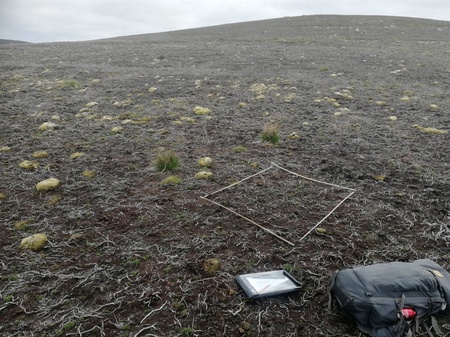 When I mention that my PhD is in wildfire ecology, most people immediately ask if I study the fires in Australia or California. I am often met with surprise when I reply that I study Scottish wildfires and that there are in fact plenty of wildfires here. While these fires are not as severe or as extensive as those in hotter and drier places, Scotland has one of the largest yearly wildfire areas in Europe.

My research focuses on how moorland ecosystems regenerate following wildfires. I mainly look at how wildfires impact plants, soil microbes and soil carbon stock. Scottish moorlands house many unique species and the soil in these habitats is typically composed of peat and organic soils. The huge amount of carbon in these soils has important implications for climate change and regulation. Carbon emissions from fire can accelerate global warming, which in turn can result in more fire-prone weather. Warm and dry conditions increase flammability of vegetation, which can lead to more frequent and severe wildfires. I find this feedback loop of climate and fire fascinating, as it puts wildfire into a global perspective.

Through field-based burning experiments (yes, we will set study plots on fire!) I will look at short-term recovery following fires occurring during different weather conditions. But how do you study succession (i.e. regeneration after a disturbance such as a wildfire) in the long term, over many decades? The best way is to repeatedly survey and sample the study area, but this is often impossible or impractical. In ecological science this issue is often solved with chronosequence surveys, also known as space-for-time-substitution. In other words, you sample several sites which share similar characteristics but represent different times since disturbance, or successional stages. In my case, I study sites where wildfires have occurred at different times in the past. At each site, I systematically record the plant species composition and collect soil samples from randomly placed plots, which I later analyse in the laboratory.

This year, I had planned to carry out field work at a number of sites across the country, but due to restrictions related to you-know-what I couldn’t travel too far from home. Luckily, Glen Tanar in the Cairngorms National Park just 30 miles from Aberdeen provides a nice chronosequence of six sites where moorland fires occurred between 1956 and 2018. The sites are not easily accessible by car, so I did all my fieldwork by foot and bike, which was rather tiring! Luckily there is a clear correlation between how strenuous your fieldwork is and how proud and satisfied you are after completing it, so at least the pay-off was worth it.

Despite the vigorous cycles and occasional clouds of midges, I was lucky with the weather and my fieldwork in Glen Tanar was successful and enjoyable. Many of my sites are located at high elevations, which allows for beautiful views over the valley. Every time I sat down among the heather and ate my lunch, I reflected that there is nothing else I would rather do, and that no office has a view like this.