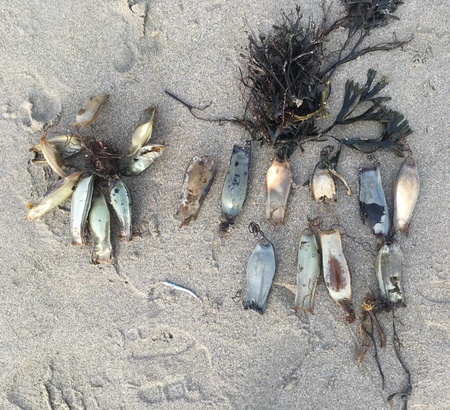 To celebrate Shark Awareness Day on the 14th July 2020, I wanted to take the opportunity to spread the love for British sharks!

Not many people know that you could find over 40 species of sharks in British waters. The UK is home to a vast diversity of species, including some of the coolest and most unusual sharks. I particularly love working with British sharks, as it gives me the opportunity to continue learning about our amazing seas and the magnificence of the animals that inhabit it. I also enjoy spreading the word that UK seas are far more exciting than they are often given credit for.

Many people think of Jaws and great white sharks when they think of sharks but with over 500 species worldwide, most sharks don’t quite fit the “classic” mould of a shark. The UK is no different, with such amazing diversity, here are a few of my favourite examples…

Basking sharks, which are second largest shark worldwide growing up to 12 m. Shortfin mako sharks, the fastest shark reaching speeds of up to 30 mph. We also have peculiar looking sharks like Angel sharks, which are flat-bodied and look more like a ray. We have egg laying species including the lesser and greater spotted catsharks. This is the most likely way you’ll come into contact with sharks in the UK, by finding the dried up egg cases “mermaid’s purses” from these sharks amongst the seaweed along the shoreline.

My research has focussed on sharks for the last 5 years and I am currently undertaking my PhD at the University of Aberdeen. I am fortunate enough that I have been able to continue working with sharks into my PhD, where I am now focusing on spurdog, also known as spiny dogfish. They get their name from the spurs (spines) in front of their dorsal fins, which secrete venom as a potentially defensive mechanism. Something else surprising is that they have one of the longest gestation periods of any living vertebrate, of up to 2 years!

Spurdog are currently listed as Endangered by the IUCN Red List in the Northeast Atlantic and can no longer be targeted for fishing, however they are still accidentally caught as bycatch. As they form large aggregations, bycatch is still a problem as they can be caught in very large numbers, for example up to 10 tonnes! As part of my PhD research, I am hoping to reveal whether these aggregations are formed of family groups. This will be done using genetic techniques, similar to paternity tests, to assemble their family trees.

In honour of shark awareness day, I would really encourage you to learn more about British sharks and look out for some egg cases on your next walk along the beach! For more resources and information about British sharks, please check out the Shark Trust website https://www.sharktrust.org/