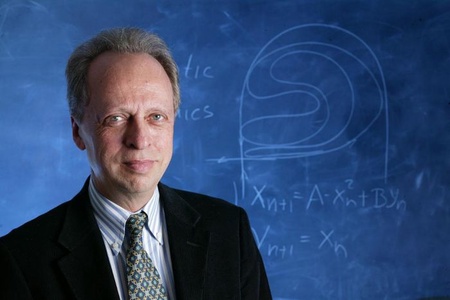 An Aberdeen physicist has been named in an influential list which has predicted 39 Nobel Prize winners since 2002.

Professor Celso Grebogi, Sixth Century Chair in Nonlinear and Complex Systems at the University of Aberdeen, is included in the 2016 Citation Laureates produced by the Intellectual Property and Science Business of Thomson Reuters.

The annual Citation Laureates identifies the most promising candidates for the Nobel Prizes and Professor Grebogi is the only scientist from a British university included in the categories for science in recognition of his work on chaos theory.

The study mines scientific research citations to identify the most influential researchers in chemistry, physics, physiology or medicine, and economics who are likely winners of the Nobel Prize in current or future years.

Professor Grebogi’s research in chaotic dynamical systems combines analytical methods and techniques with extensive computer-based experiments. He has made an enormous international impact with his seminal work in the area of chaotic control.

Professor Grebogi has co-authored work challenging the long standing scientific belief that chaos was uncontrollable, with Professor Edward Ott and Professor James A. Yorke from the University of Maryland.

He said: "To appear in the 2016 Citation Laureates is a great honour. The list is held in high regard because it has been successful in predicting 39 Nobel Prize winners in the last 14 years. However, while we are delighted to be included, it is unlikely that we can compete this year against the Laser Interferometer Gravitational-Wave Observatory (LIGO) gravity experiment, the first direct detection of gravitational waves and a result long awaited since Einstein’s prediction of gravity waves in 1916.

"It a privilege to have our work, which opened up a whole new area of research, changing philosophically our way of thinking about chaos, considered in the same company as such a significant breakthrough in physics.”

The Nobel Prize for medicine will be announced on October 3 followed by physics on October 4 and chemistry on October 5.