Chemistry Technician of the Year award for Brian
22 December 2014 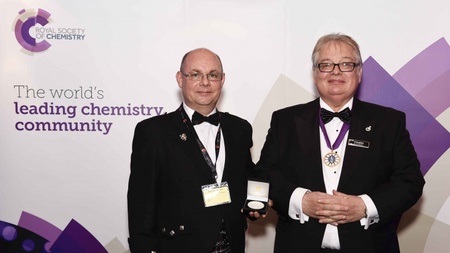 Brian Paterson from the Department of Chemistry has been awarded the Royal Society of Chemistry's Chemistry Technician of the Year award for higher education and research.

Brian received the award from Professor Dominic Tildesley, President of the Royal Society of Chemistry, at its General Assembly held in Manchester in November.

Brian joined the Department of Chemistry in 1992, and received this award for his commitment to maintaining and managing the thermal analysis facility, and his contributions to teaching and outreach.

He is also strongly committed to providing support for staff across the Institution as an active trade union representative. In addition, he is a member of the University Court.

I am extremely grateful to The Royal Society of Chemistry for this award and feel honoured to have been recognised in this way." Brian Paterson

Accepting the award Brian said: “I am extremely grateful to The Royal Society of Chemistry for this award and feel honoured to have been recognised in this way.  My sincere thanks go to the University and the Department for supporting me in developing both in my career and on a personal level and further to this both my technical and academic colleagues in the department whose support and guidance have been instrumental in shaping my career.”

Chemistry Technician of the Year Award recognises individuals that have been working in a technical support role, with a strong basis in chemical sciences, for at least one year.

The Royal Society of Chemistry is the world’s leading chemistry community, advancing excellence in the chemical sciences. With over 50,000 members and a knowledge business that spans the globe, we are the UK’s professional body for chemical scientists; a not-for-profit organisation with 170 years of history and an international vision for the future. We promote, support and celebrate chemistry. We work to shape the future of the chemical sciences – for the benefit of science and humanity.