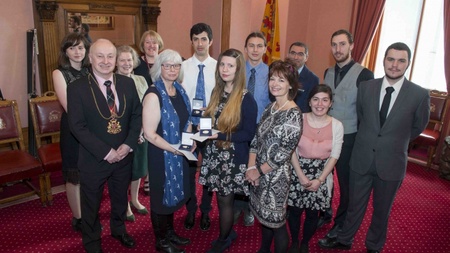 A medical student who worked with doctors in a remote field station in The Gambia was among those to receive the University of Aberdeen's top student award.

Alexander Aulakh was awarded the Quincentenary Prize which was established to mark the University’s 500th anniversary and recognises the exceptional efforts and talents of students.

Ana Maria Ciocarlan from the School of Natural and Computing Sciences and Eva Valclavkova from the Business School were the other winners of the award which was presented to them by Dame Professor Anne Glover and the Lord Provost of Aberdeen, George Adam, at the Aberdeen City Council Town House.

Alexander’s interest and passion for global healthcare in the poorest parts of the world led to him developing links with the University and medical schools and organisations in the West African country. These connections will benefit future students wishing to follow a similar path in the future, as will the ‘Student’s Guide to The Gambia’ booklet that Alexander wrote to advise others.

In nominating Alexander for the award, Professor Rona Patey, Director of the Institute of Education for Medical and Dental Sciences, described Alexander as “an outstanding student, who has really made a difference to the communities in which he has learned and studied, both locally and overseas”.

Described by nominators Professor Judith Masthoff and Professor Jan Skakle from the School of Natural and Computing Science as “a truly exceptional student”, Ana has complimented her academic studies with a wide range of community engagement activities – including collaborating with Robert Gordon University and Aberdeen City Council on improving park culture and promoting community events in parks.

She has also been Involved in variety of University initiatives including Power Shift and Carbon School – schemes that encourage and support local charities to reduce their carbon footprints and energy bills. Ana also helped setup Swap Shop and the Food Corner – the student food co-operative. As well as working as an intern at the university and teaching undergraduate computing courses, Ana has served as Vice-President for Employability in Aberdeen University Student Association.

Eva Valclavkova was part of a team of University of Aberdeen students who enjoyed success at a prestigious international Real Estate competition hosted by Ivy League University, Cornell, in New York.

The team reached the final, finishing fourth out of 17 universities, and scooping a prize of $1500 in prize money. The team beat Cambridge in the first round - the only other UK university represented.  Other teams hailed from Australia, Hong Kong, USA and Canada

In nominating Eva for the award, Dr Ndubuisi Anomelechi-Onyeodi, senior lecturer at the Business School, said she had “made tremendous positive contributions to student life” and “enormous input to various activities and representations that have placed the University, and Business School in particular, in a very positive light.

In addition, Eva represented the University at the G200 conference in Germany and won STAR Awards for active involvement in societies (Silver for President of Economics Society and Bronze for being vice-president of Accountancy and Finance society). She also organised the Business Ball in 2015 and 2016 for 200 attendees and Worked with Silver City Surfers – a body that help people over the age of 55 to use computers and other new technology.