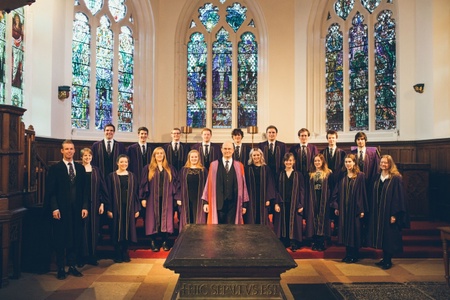 For more than 500 years choral voices have filled Aberdeen's ornate King's College Chapel and now they will be heard around the world with the launch of a new record label.

Both choirs have garnered an international reputation for the quality of their vocal music and such is their growing reputation that in recent years their singers have been invited to perform at iconic celebrations in front of Her Majesty The Queen, and their Royal Highnesses the Duke of Edinburgh and Prince of Wales, as well as at the BBC Proms and for Songs of Praise and the Watchnight services.

Choral music has been central to life at Aberdeen since King’s College was founded in 1495 when Bishop Elphinstone established a choral foundation of six, later, eight, choirboys and eight singing priests, one of whom doubled as the organist. The boys were expected to sing plainchant, and were trained to improvise polyphony and to read music.

Head of chapel and ceremonial music, Professor David Smith, says that this tradition continues to influence the musical output today with both the University’s choirs and composers reaching new highs.

“We have a musical heritage of more than five centuries at Aberdeen but the current period represents one of the strongest periods for vocal music.

“Our choirs are in high demand and such is the quality of their work that the choirs have been invited to perform at flagship events including the BBC proms and in front of the royal family.

“Aberdeen is also home to gifted student and staff composers, including Professor Paul Mealor who has achieved worldwide acclaim. The record label will provide an opportunity to showcase the work of our other talented composers, including music by Phillip Cooke. His music has won widespread critical acclaim, and it is a privilege to be able to making premiere recordings of three of his pieces”

The first record to be released on Vox Regis will feature the 22-strong Chapel Choir. The CD takes its name , O sacrum convivium, from a work by Dr Phillip Cooke, a lecturer in Music at Aberdeen whose music features alongside that by postgraduate composers Thomas LaVoy and John Hudson, and a piece by Paul Mealor which was written especially for the Choir.

Proceeds from the sale of this CD will support vital research at the University into prevention and early diagnosis of diseases that cause dementia.

Professor Mealor said: “This is a truly wonderful disc of the beautifully old and the inspiring new in sacred music. The recording of my own Locus iste, written for this choir, is delicate, emotionally charged and beautifully balanced.

“The University’s Master’s degree in vocal music allows students to concentrate on choral composition, and provides a gateway to doctoral study. The quality of their work may be gauged from the inclusion of music by PhD students on the disc.”

The next CD of choral music will be recorded in the autumn by the University Chamber Choir under the direction of Paul Mealor. It will feature musical arrangements of Burns by Aberdeen composers, and be ready in time for Burns Night.

Professor Smith added: “Our choirs have been compared favourably with some of the top college choirs in the UK, and the hope is that the record label will help to raise the profile of the University in the public eye. Even better, all the proceeds from CD sales will go to charity, through the Development Trust. The first CD is in aid of dementia research at the University – so many of us have relatives and friends suffering from dementia, and the way in which music can have a positive effect on them made this an obvious cause to support.”

O sacrum convivium, featuring the Chapel Choir, will be launched on at the University’s May Festival on Friday 27 May. Recorded in King’s College Chapel, it contains a wide variety of music by composers such as Tallis, Victoria, Purcell, Lotti, Stanford, Stainer, Tavener as well as the new music by Aberdeen composers.  It will be available ‘at all good record shops’ worldwide, or for download from iTunes and Amazon.  The second album released on the label will be recordings of Scottish bassoon music, and plans are already well advanced for a first recording of cantatas by Ruggieri (a contemporary of Vivaldi), edited by the department’s Dr Jasmin Cameron, whilst the Chamber Choir’s Burns album is scheduled for recording in October.