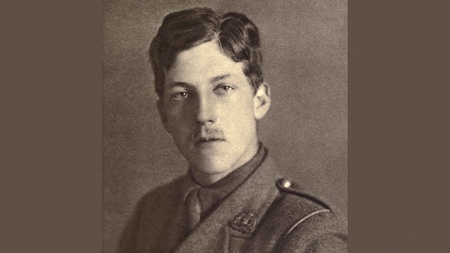 The life and work of Aberdeen's greatest war poet will be commemorated at the May Festival, where a new work written in his honour will be performed for the first time.

Charles Hamilton Sorley was born on this day (May 19) 1895 in Powis House, which is now Powis Gateway Community Centre. He was the son of a University of Aberdeen professor, William Ritchey Sorley, who taught moral philosophy.

Sorley was just 21 when he was killed by a German sniper’s bullet during the Battle of Loos in 1915 but when his work was published posthumously a year later, it made a significant impact. He was described by poet, writer and critic Robert Graves as “one of the three poets of importance killed during the war,” alongside Wilfred Owen and Isaac Rosenberg.

To mark the centenary of the publication of his collection, an event titled ‘Sorley’s Bullet’ will take place at the May Festival at the University of Aberdeen’s King’s College Chapel on Saturday May 28.

It will feature readings of Sorley’s work alongside music performed by the Choir of King’s College, Aberdeen.

Poet Martin Malone, an Honorary Fellow of the WORD Centre for Creative Writing at University of Aberdeen, will give the first public reading of a piece he has written in Memory of Sorley, from which the event takes its title.

Sorley had been studying in Germany at the outbreak of the First World War but following a brief internment returned home and immediately enlisted as a second lieutenant in the Suffolk Regiment. He was sent to the Western Front in May 1915 as a full lieutenant, saw action at Ploegsteert in Flanders, and was promoted to captain that August.

But like many his life was cut short at The Battle of Loos, an ambitious attack masterminded by Sir Douglas Haig. Of the nearly 10,000 British soldiers who attacked, 385 officers and 7,861 enlisted men were killed.

Among them was Sorley, who was shot in the head by a German sniper on October 13. His body was never found.

We felt than on the centenary of the publication of his poetry collection, it was fitting not only to pay tribute to his memory but to provide a platform for audiences in Aberdeen to appreciate his work" Professor David Smith

In his soldier’s kit were 37 poems and these were published posthumously. One entitled “When You See Millions of the Mouthless Dead,” contained the powerful lines “…scanning all the overcrowded mass, should you/Perceive one face that you loved heretofore,/It is a spook. None wears the face you knew/Great death has made all this for evermore.”

Martin Malone said: “In terms of our poetry led views of the Great War, Charles Hamilton Sorley was way ahead of the curve: years before the protests of Sassoon and Owen he saw the war for the senseless waste that is was.

“Killed by a sniper’s bullet at Loos in 1915 at the age of 21, he only lived long enough to leave us a handful of acerbically intelligent and unsentimental poems from the Front Poems which hint at the scale of the talent prematurely lost. My own regard for him is rooted in these poems and a coincidentally shared love for both Aberdeen and the Wiltshire landscape around Marlborough where he went to school. He and Powis House deserve a blue plaque without doubt.”

Professor David Smith, who will lead the performance at May Festival, added: “Charles Hamilton Sorley is Aberdeen’s greatest war poet and had strong connections to the University of Aberdeen through his father, who lectured here. Despite this, his work is not widely known in the city.

“We felt than on the centenary of the publication of his poetry collection, it was fitting not only to pay tribute to his memory but to provide a platform for audiences in Aberdeen to appreciate his work.”

Dr Helen Lynch, a lecturer in Creative Writing, said: “In addition to readings from Sorley’s own work, the performance will feature a contemporary tribute by talented poet Martin Malone and the voices of the Choir of King’s College, Aberdeen. Set within the scenic surroundings of King’s College Chapel it is sure to be a beautiful and moving experience.”

Tickets for the event, supported by the Balmoral Group, are free of charge but must be reserved by visiting www.abdn.ac.uk/mayfestival or calling the Aberdeen Box Office on 01224 641122.

Sorley’s Bullet is part of a wide programme of events at May Festival dedicated to music and literature. For the full programme visit www.abdn.ac.uk/mayfestival