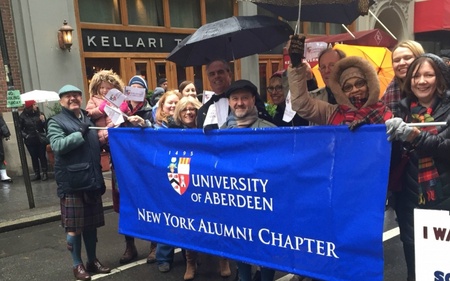 The University of Aberdeen's New York Alumni Chapter were out in force for the Big Apple's annual Tartan Day parade, held earlier this month.

Not even rain or freezing cold conditions could dampen the spirits of Chapter members, over 30 of whom took part in the parade as it made its way up 6th Avenue.

Thankfully for those involved there was the prospect of warm drinks to look forward to at the post-parade reception, which was held at the Long Room pub.

Kirsten Hartil, who is the New York Alumni Chapter Chair, said it was a memorable day for all involved.

“The Tartan Day Parade is the highlight of the NYC Chapter's activities, so it was really fantastic to see so many alumni turn up with their families to walk in the parade on a wet Saturday.

The Tartan Day Parade is the highlight of the NYC Chapter's activities, so it was really fantastic to see so many alumni turn up with their families to walk in the parade on a wet Saturday" Kirsten Hartil

“Despite the rain everyone was smiling and seemed to be having a good time, and the fact that so many people were lining 6th Avenue to cheer us on definitely kept our spirits up.

“The University of Aberdeen Foundation chose to have its Board meeting in New York that week, and both Liz Bowie from the University’s Development Trust and Bill Naphy, Dean for North American Affairs, travelled over to take part in the event.  This demonstrates the level of support the Chapter has from the University.

“We are working hard with the American Scottish Foundation, the British Council, Brits on Broadway, and other UK universities to bring fun events to Aberdeen alumni in the area and we want to hear from anyone who wants to participate or who has any ideas.

“Anyone who is interested can easily get in touch by emailing aberdeenalumniny@gmail.com. We’d be delighted to hear from you!”