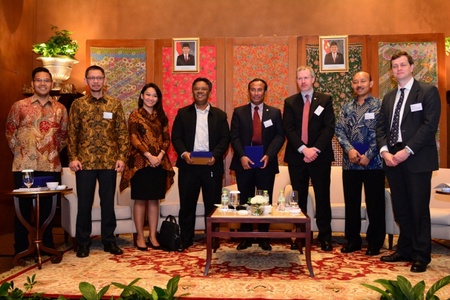 A one-day conference focusing on the legal and regulatory challenges facing Indonesia's oil and gas sector has been hailed a success.

The event - Challenges for Oil and Gas: the Legal and Regulatory Dimension - was hosted by the University of Aberdeen’s Jakarta Alumni Chapter, and took place in the Indonesian Capital on Friday.

Professor John Paterson and Emre Usenmez from the Aberdeen University Centre for Energy Law were among the speakers at conference, which also featured Professor Dr Gusti Nyoman Wiratmaja Puja, the Director General of Oil and Gas at the Indonesian Ministry of Energy and Mineral Resources.

The event was attended by key figures from the Indonesian parliament, the state oil company Pertamina, and national energy regulator SKK Migas. In addition to individual presentations, the conference included panel discussions where the key issues affecting the regulatory landscape were debated.

Commenting on the conference, Professor Paterson - who is Vice-Principal for Internationalisation at the University of Aberdeen - said: “The conference was a timely opportunity for key stakeholders to exchange ideas about the proposed reforms to Indonesia’s oil and gas sector.

The discussions were characterised by well-informed perspectives, candour and good humour, and many of those involved said that it was by far the best event of its kind that they had attended." Professor John Paterson, Vice-Principal for Internationalisation

“The country is by no means alone in considering these issues, and there was also the opportunity to discuss what is happening in other jurisdictions, notably the UK.

“The feedback we had from everyone who attended was overwhelmingly positive, with participants commenting that the right speakers were involved and that the quality of the discussion was very high.

“The discussions were characterised by well-informed perspectives, candour and good humour, and many of those involved said that it was by far the best event of its kind that they had attended.

“The University’s Jakarta Alumni Chapter worked tirelessly to help organise and host the conference, and I’d like to thank them for all their hard work in helping to make it such a success.”