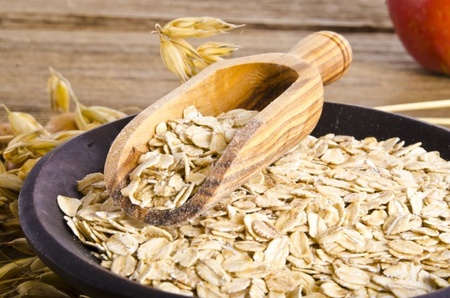 There is more to oats and barley than just porridge and broth as a new recipe book, Go with the Grain developed and compiled by researchers at the Rowett Institute of Nutrition and Health aims to show.

Currently, 68% of adults in Scotland are considered overweight or obese which in turn leads to increased levels of cardiovascular disease in the population. Oats and barley can play a significant role in combatting these problems as increased consumption of these whole grains can;

Designed to encourage people to eat more oats and barley on a daily basis, the book shows how the grains are much more versatile than many think, and how they can lend themselves to making favourite meals healthier. Each of the recipes includes the nutritional information breakdown, and the oat and barley content per portion, helping people follow the Eatwell guidelines.

Dr Karen Scott, who worked on creating Go with the Grain said: “We have been studying the ways in which diets rich in oats and barley might improve the health of both our hearts and our gut. Oats and barley are wholegrains as they are not refined during production to remove the outer layer of the grain. This outer layer is rich in fibre, which provides food for gut bacteria, and helps maintain a healthy gut, as well as lowering blood pressure.

“There are many different types of fibre and oats and barley are a rich source of a soluble fibre called beta-glucan. Three grams of beta-glucan per day has been found to reduce cholesterol, and this is equivalent to eating around 100g per day of oats and barley.

We have been studying the ways in which diets rich in oats and barley might improve the health of both our hearts and our gut. " Dr Karen Scott

“These grains are much more versatile than many people think and can be incorporated into many different recipes to make both savoury and sweet dishes, as well as baking, healthier. For example the book features Sausage stew, a Chilli and Barley Couscous and sweet treats such as Apple and Bramble Crumble and Scones.

“All the dishes are made healthier by replacing starchy foods such as pasta and rice with wholegrains, but without compromising on taste.”

For more information or to download Go with the Grain, visit https://www.abdn.ac.uk/rowett/policy-industry/oat-barley-cookbook-805.php or to request a print version email rowett100@abdn.ac.uk and remember to include your postal address.

This work was funded by the Scottish Government Strategic Research Programme.