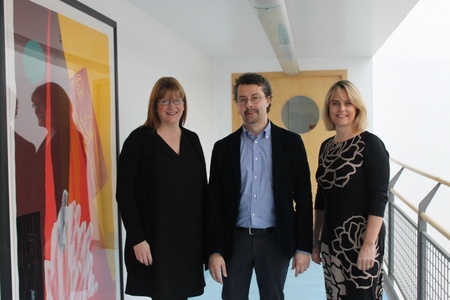 Aberdeen scientists' fight to beat Alzheimer's disease has been aided by a generous donation from oil and gas firm Apache.

The £45,000 gift will be used to buy a specific piece of equipment that is vital to research being carried out by experts at the University of Aberdeen.

The peptide synthesiser will allow scientists to develop new treatments and ways to diagnose dementia and Alzheimer’s disease and will vastly improve on the current situation where samples must be sent to and from a lab in Italy.

The contribution follows a previous donation from Apache of £16,500 to support Alzheimer’s research at the University. They also sponsored a charity dance which raised £55,000 for the same cause.

Professor Matteo Zanda, chair in medical technologies and Director of the J. Mallard Scottish Positron Emission Tomography (PET) Centre at the University of Aberdeen said: “We are extremely grateful for the generosity of Apache in donating the money for us to buy such an important piece of equipment which will aid us in our important Alzheimer’s disease research. Currently we have to access facilities in Milan which slows down the process considerably, so to have this facility in our own labs should enhance our productivity and effectiveness.

We are extremely grateful for the generosity of Apache in donating the money for us to buy such an important piece of equipment which will aid us in our important Alzheimer's disease research." Professor Matteo Zanda

“Thanks to Apache’s donation, the Kosterlitz Centre for Therapeutics and the John Mallard PET Centre at the University of Aberdeen, will further strengthen their competitiveness in the sector as we will be able to equip the labs with this peptide synthesiser, a reactor which strongly facilitates the production of novel peptide therapeutics and diagnostics for research in dementia and Alzheimer’s.”

Patricia Paterson, Executive Assistant of Apache North Sea said the company was delighted to support the University with the purchase of such an important piece of equipment.

“Our approach to giving in the communities where we operate centres on a simple philosophy - ‘to give where we live’, she said. “We take pride in our corporate outreach program that is employee-driven, enabling and empowering them to nominate where the funding would be most valuable within our community.”

The donation was helped in part by local Charlie Bain, director of telecommunications firm C Euro Communications, who has organised a number of large events, sponsored by Apache, to raise money for dementia and Alzheimer’s research at the University of Aberdeen.