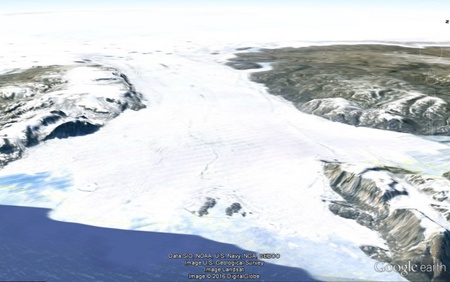 Dr Brice Rea is part of a team, led by the University of Durham, which have just received £600k+ funding from NERC for a four year project on “Greenland in a warmer climate:  What controls the advance & retreat of the NE Greenland Ice Stream”. The NE Greenland Ice Stream drains a major part of the ice sheet and terminates in two marine ice margins. Up-flow from the present ice fronts are a number of submarine basins which make the ice stream susceptible to instability and rapid retreat. One of the outlet glaciers has already lost its frontal ice shelf and the other (79 North) is known to have disappeared at least once during the past 10,000 years. The project combines an onshore and offshore field data collection programme to constrain the geometry and dynamics of the ice stream from the last glacial maximum through to the present. These empirical data sets will then be used to constrain numerical modelling which will provide a deeper understanding of the sensitivity of this system to predicted climate forcing. The project is also benefiting from a major in-kind contribution (>£2 million) through the Alfred Wegener Insititut, Germany.