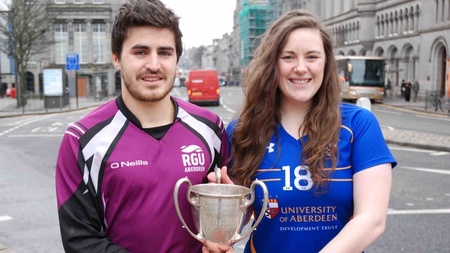 Hundreds of students will fight for their university's pride this week as teams from Robert Gordon University (RGU) and the University of Aberdeen prepare to do battle in the annual Granite City Challenge.

The largest university sporting event in the UK is in its nineteenth year and is always closely contested with local bragging rights at stake.

The University of Aberdeen have a strong record in the event and triumphed last year, winning by a three point margin.

This year the event, which has been sponsored by Ernst & Young, will be held on Wednesday, March 23.

Other sports such as football, rugby and badminton are also on the challenge programme.

The RGU team comes into the event in high spirits having won their fifth consecutive Aberdeen Universities Boat Race earlier this month.

GianPiero Franchi, President for Sport and Physical Activity at RGU, is looking forward to a busy day of university sport.

He said: “It's exciting to have so many sporting activities across the city against our local rivals in the Granite City Challenge.

We would love to see lots of spectators come along to watch the games and get involved! There will only be one winner and I hope to see Blue and Gold retain the title." Megan Burgoyne, University of Aberdeen President for Sport,

“Both universities are doing a lot of work to promote sport to students and it is important to maintain a healthy rivalry. It would be great to have a big turnout on the day as cheering crowds can make a big difference.

“With so many of our athletes and teams performing well this year, and with our recent victory in the boat race, we are looking to push Aberdeen every step way."

University of Aberdeen President for Sport, Megan Burgoyne is looking to defend the trophy following the teams’ victory last year.

She said:  “The Granite City Challenge is a fantastic event which showcases the best of club sport that the University of Aberdeen and Robert Gordon University have to offer.

“The rivalry is fierce and both sides are in it to win it. Although we have won the title 17 out of 18 years, we know RGU are always hot on our tails.

“It’s going to be a really exciting day with many fixtures taking place all over Aberdeen. We would love to see lots of spectators come along to watch the games and get involved! There will only be one winner and I hope to see Blue and Gold retain the title.”

Both teams will also wear rainbow laces on the day to support to promote the inclusive nature of student sport.

The day is packed with sporting fixtures which will take place at various venues across the city including RGU SPORT, Aberdeen Sports Village, Pitfichie Forest, Gordon Barracks and the University of Aberdeen campus.