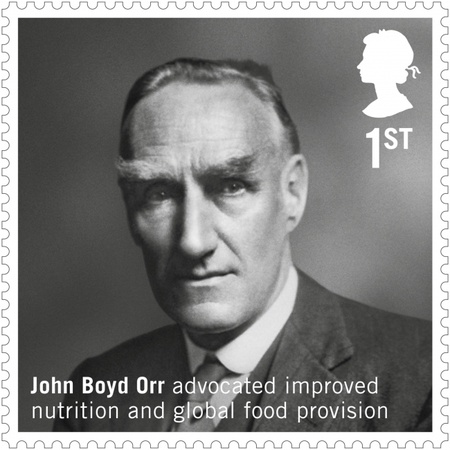 As staff from the Rowett Institute of Nutrition and Health prepare to move into their new headquarters at Foresterhill, founder and first director of the institute Lord Boyd Orr has been honoured by Royal Mail by being included in its British Humanitarians Special stamps.

The new set of stamps has been created to honour six of the UK’s greatest humanitarians and their achievements.

Lord Orr, who was awarded the Nobel Peace Prize in 1949, founded the institute in 1913 to further research in animal nutrition but shortly after left when World War 1 broke out. He returned in 1919 with a staff of four to begin work in the laboratory.

Among his many achievements was leading a study looking at the importance of milk in the diet where he examined the effect on the growth of children. Orr observed that those who grew best had milk in their diets. This ultimately led to the policy of giving children free milk in schools.

Another of his great contributions came in the late 1930s in the form of The Carnegie Survey, where he looked at the diet and health of over 1300 families across the UK.

The survey data was in the process of being analysed at the outbreak of World War II and the results were used to inform the development of UK food rationing policy, which for the first time was based on a greater understanding of nutritional needs, with special measures to safeguard the health of mothers and children.

So effective was this understanding of nutritional needs that the nation’s health was said to be generally better at the end of WWII than it was at the beginning.

It is wonderful and entirely fitting that Lord Boyd Orr is honoured in such a way and I am delighted that Royal Mail has done so. His work changed our understanding of the relationship between diet and health and he was the first scientist to show that there was a link between poverty, poor diet and ill-health." Professor Peter Morgan

Orr also played an important part in establishing the Nutrition Society, the UK’s foremost learned society in nutrition, for which he was elected as it first Chairman.

Professor Peter Morgan, the current Director of the Rowett, said: “It is wonderful and entirely fitting that Lord Boyd Orr is honoured in such a way and I am delighted that Royal Mail has done so.

“His work changed our understanding of the relationship between diet and health and he was the first scientist to show that there was a link between poverty, poor diet and ill-health.

“In 1946, on retiring from the Institute, Boyd Orr was appointed the first Director General of the Food and Agriculture Organisation (FAO), where he campaigned tirelessly for the establishment of a World Food Plan to alleviate the problems of global food inequality.  World politics at the time meant his great vision was never realised, although Boyd Orr did subsequently receive the Nobel Prize for Peace in 1949 in recognition of this work.

“As our staff begin the process of moving into our new purpose-build facility, it is the perfect opportunity to stop and remember where it all began. The research Orr undertook here fundamentally altered the way people thought about food and health and today the Rowett continues to push the boundaries in our understanding of health and nutrition.”

The stamps are available now in 8000 Post Office branches, online at www.royalmail.com/humanitarians or by telephoning 03457 641 641.