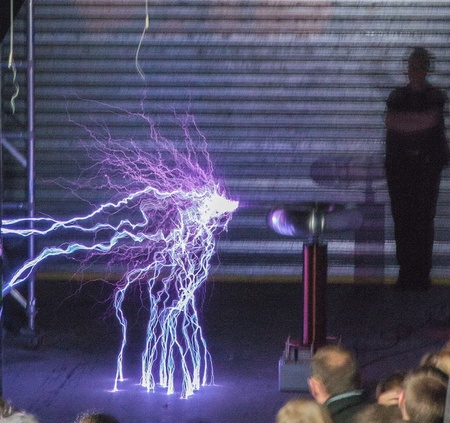 Tarland is set to witness the first demonstration in Scotland of a theatre-size musical lightning generator.

The lightning generator was designed by scientists from Aberdeen Science Centre and the University of Aberdeen and will be shown as part of the Tarland Talks series which has brought the University’s popular café science format to a rural setting.

The talk entitled “Sparks in Tarland” will take place on Wed 16 March and feature rarely seen electrical demonstrations including the first public demonstration of Scotland’s largest Tesla Coil – a device based on the work of 19th century electrical engineer Nicola Tesla.

Dr Ken Skeldon, Head of Public Engagement at the University and Chair of Aberdeen Science Centre said “The demonstration lecture will feature some highly visual high-voltage effects that were popular with Victorian audiences and the technological expositions of the industrial revolution. However our demonstrations in Tarland have a twist, as modern technology has allowed re-invention of the equipment, even enabling us to generate musical lightning.”

...our demonstrations in Tarland have a twist, as modern technology has allowed re-invention of the equipment, even enabling us to generate musical lightning." Dr Ken Skeldon

Lesley Ellis of the Cromar Future Group explained “We have a very vibrant community in Tarland, with a lively arts and history scene. However there is a big appetite for us to bring science topics to our community. The talks have been extremely well received so far with large audiences attending.”

Liz Hodge, Chief Executive of Aberdeen Science Centre said “We’re delighted to be working with the University to put on this ambitious performance in Tarland because very often these large scale events are reserved for large city centre venues. We’re using the great space of Tarland’s MacRobert Hall to allow for an enthralling, helping to stimulate and encourage curiosity in science and technology.”

Tarland Talks is supported by the University of Aberdeen, Tarland Development Group and MacRobert Trust. The “Sparks in Tarland” event is also supported by an International Year of Light grant from the Scottish Universities Physics Alliance. The event will commence at 7.30pm and entry costs £4 for adults with refreshments available at the venue.

British Science Week continues until the weekend with the highly popular Discovery Day taking place at Aberdeen Science Centre on Saturday, with entry just £1. Full details of all events can be found at www.abdn.ac.uk/engage/nsew or follow us online at #bsw16abdn.