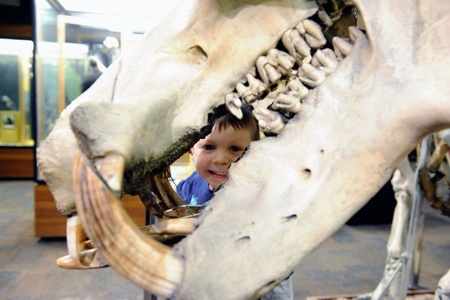 This weekend will see scientists inspire, motivate and enthuse audiences across the City and Shire as British Science Week kicks off for 2016.

Offering the biggest programme in the UK, the University of Aberdeen and the British Science Association Branch in Aberdeen will bring an exciting array of talks, hands-on activities and workshops to audiences of all ages.

Led by the British Science Association, British Science Week is the UK’s annual celebration of science, technology, engineering and maths and with support from the University of Aberdeen, the line-up from the Aberdeen branch has something for everyone.

Those aged 18 and over will have the chance to spend Friday night at the museum in Museum Lates: Ice & Fire - an adult only evening in the Zoology museum with music, face painting and a cash bar on Friday 18 March.  On Tuesday March 15, Dr Jonathan Pettitt, from the school of medical sciences will host a screening of the 1997 film GATTACA and will discuss whether recent scientific advances in genetic screening and modification could make this science fiction a reality. There is a nod to the upcoming Summer Olympics in Bring Your Own Brain VI – Be a good sport on Wednesday March 16 where Neuroscientists from the University will investigate how brains play a role can be in an athlete’s preparation.

Other highlights include a look at how caesarean sections in the north-east of Scotland have changed in the last 60 years when Dr Mairead Black, a Clinical Lecturer at the University reveals how patterns of births in the area compares to other regions of the UK and beyond. Dr Frank Thies from the Rowett Institute of Nutrition and Health at the University will talk about the influence of diet on cardiovascular risk in Healthy Eating for a Healthy Heart on Thursday 17 March.

The ever-popular Café series of talks are represented on Monday 14 March with a special Café Med looking at the University’s world-leading research into Huntington’s Disease and a special Café Scientifque on Wednesday 16 March that will explore what lies in store for the oil industry.  The Tarland Talks series also has a special event for British Science Week on Wednesday 16 March with ‘Sparks in Tarland’ in which Dr Ken Skeldon will present Scotland’s largest high-voltage musical Tesla Coil.

There’s plenty to inspire young minds too with a schools programme fit to burst with fun and interactive events.  The week will draw to a close with the hugely popular Family Discovery Day at Aberdeen Science Centre on Saturday March 19.

Dr Heather Doran, Project Officer in the University’s Public Engagement with Research Unit, and British Science Association, Aberdeen branch chair said: “The programme for this year’s British Science Week in Aberdeen is fantastic. There is a wide range of events including talks and hands-on activities, designed to engage both adults and children with topics from across the scientific spectrum.

“Science Week is a fantastic opportunity to discuss and discover more about the world around us and the latest scientific advancements here in Aberdeen.”

These events are just a taste and of what is on offer throughout the city and shire for British Science Week. Most of the events are free but many require booking.

The programme runs from March 11 to March 20 and full details of all the events, and details on how to book, can be found at www.abdn.ac.uk/engage/nsew or on Facebook www.facebook.com/BritishScienceAssociationAberdeen.