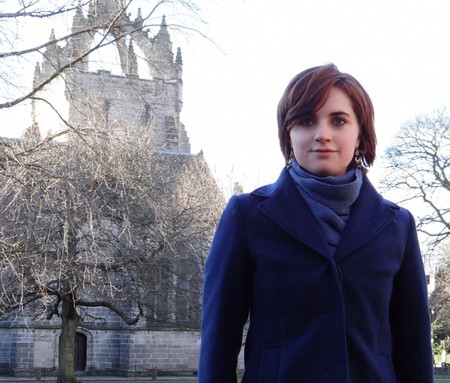 A politics student at the University of Aberdeen has secured first place and a £750 prize in a prestigious literary competition dedicated to one of history's great figures.

Hannah Pankow, who is in the fourth year of a Politics and International Relations degree, is the winner of the 2015 Benjamin Franklin House Prize.

The competition invites young writers aged between 18 and 25 to interpret a quote by Benjamin Franklin, known as a ‘founding father of America’ and for his work and discoveries in physics.

The quote for 2015 was: 'If all Printers were determin’d not to print any thing till they were sure it would offend no body, there would be very little printed.'

Hannah said: “The quote chosen really appealed as I have a strong interest in the freedom of speech and that’s clearly something which is very relevant today.

Hannah, who is originally from Germany, penned a piece drawing on key works such as Charles Darwin’s On the Origin of Species and Thomas Paine’s Common Sense.

“These are considered to be great works for humanity,” Hannah added, “But if you look to the time they were written they were considered highly offensive.

“We need people to push the boundaries of knowledge to progress and cannot be held back by the conventions or political will of a particular period in time.

“I set out that this right to offend is central to the principle of free speech and that is as clear to see today as it was in the time of Darwin when we look at publications like Charlie Hebdo and Britain’s revised Counter-Terrorism Strategy.”

Her entry impressed the judging panel and Hannah was awarded the top award which comes with £750 in prize money.

She said: “I was surprised to find my piece had been selected as the overall winner. It is fantastic to have your work recognised in the way and particularly when it involves a subject matter I am passionate about.”

Hannah will receive her award at a special ceremony in London and her winning essay will be published online by The Telegraph.