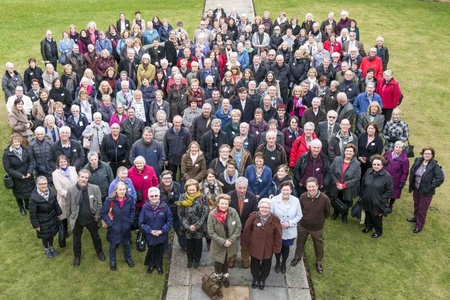 More than 300 school children of the 1950s were reunited for the first time in half a century on Saturday as the University of Aberdeen kicked off the next phase of a unique and important study.

Around 15,000 children completed tests, starting in 1962, as researchers from the University of Aberdeen attempted to discover the causes of learning disabilities.

The findings identified factors that made children more vulnerable to learning difficulties and continues to inform the care of babies today.

On Saturday in Old Aberdeen, members of the Aberdeen Children of the 1950s study came together to hear presentations about the study's results and impact, and met with researchers who were interested in recording the important events in their lives, as well as members' ideas for new studies over the coming years.

There were many keen volunteers for future investigations, NHS Research Scotland was at the event and registered a record number of people.

The event was also a primary school reunion, with former students from primary schools across the city attending and recreating their class photos. The Aberdeen Children of the 1950s team were delighted to meet with so many study members, and to hear their enthusiasm for the future of the project.