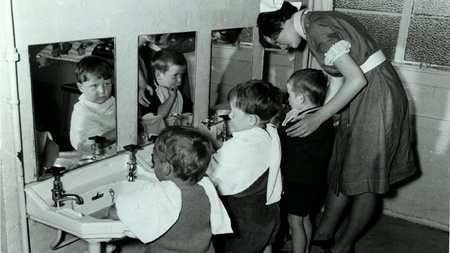 Aberdeen school children who completed important learning ability tests more than half a century ago are to come together for the first time since then to help scientists with new questions.

The Aberdeen Children of the 1950s study began in 1962 when researchers from the University of Aberdeen surveyed 15,000 7-12 year olds across the city, originally to attempt to discover the causes of learning disabilities.

Through data linkage the researchers identified important factors that made children more vulnerable to learning difficulties, including being born very prematurely – information that continues to inform the care of babies today.

This weekend, 300 members of the group, some of whom who are likely to have been classmates, will meet for the first time since they completed the original tests, as the University looks to begin a new study using the 1950s cohort.

“Several things make the Aberdeen Children of the 1950s study special and valuable,” explains Dr Jessica Butler, a chronic disease researcher at the University and organiser of the event.

“It’s unusual because it includes not a sample of people, but almost every child in the city. It measures not just health, but combines health data with education, social, and demographic information.

“This means the study can be used to answer many types of questions like: what are the important influences in childhood that are linked to adult health? For those that had a difficult start in life, what helped them succeed later on? What things in family, school and community life influence our wellbeing?”

In 2000, around two-thirds of the original Children of the 1950s cohort completed an extensive postal questionnaire about their lives, and at the same time, their recent health records were also linked into the study.

The combined research from the 1960s and 2000s has since been used by researchers in Australia, New Zealand, the United States, the UK and Sweden in over 40 studies. Several studies have shown the variety of ways poverty can impact on a person’s life and health. Other studies have looked into causes of heart disease and diabetes, and the importance of health during pregnancy and early life on our wellbeing in adulthood.

Funded by a grant from the Economic and Social Research Council (ESRC), researchers at the University were able to contact the original participants. The goal of the new project is to discover how members, who are now between 60 and 65 years old, have been able to adapt after times of adversity.

It's only in recent years I've realised the scale of the project, and I realised I was really quite privileged to be involved with it." 1950s birth cohort member, Bill Harkes

Dr Butler said: “We are interested in what helps people bounce back during difficult times like a serious illness, a job loss, or loss of a loved one. The new project will involve linking the Aberdeen Children of the 1950s to information like industry records, census data, and social welfare records.

“Researchers will also interview study members to find out what they have found most important over the course of their lives.”

The event on Saturday will see hundreds of participants come together at the University of Aberdeen’s Old Aberdeen campus to meet with their fellow participants and hear about the next stage of the project from researchers.

Bill Harkes was a pupil at Westerton Primary School in Northfield, Aberdeen, when he would have completed the tests in 1962. He’s worked in the city ever since, mainly in the Social Work and Care sector.

He confesses he has no recollection of completing them and it wasn’t until the follow up study in 2000 when he became fully aware of the cohort’s significance.

“As children, we obviously had no idea of the scale and eventual relevance the studies would have. We would have just completed them as part of our day-to-day work.

“It’s only in recent years I’ve realised the scale of the project, and I realised I was really quite privileged to be involved with it.

“I’ve seen the amount of international researchers that have requested access to our information and I realised that, unbeknownst to me, I’ve been chosen to contribute to this body of knowledge that has implications on such a wide range of health and societal issues.”

“It will be interesting to see if I recognise any old faces that I went to Primary School with.

“I see the initial data that we’ve given in the past as the ‘bones’ for this project, but this next phase will add the ‘flesh’ – looking at the historical, political and social context of the study group. It’s such a rich mine of information, I’d imagine there are researchers from a variety of different backgrounds who will be interested in speaking with us in various ways.

“In addition to our data, we were also asked if any of our family members would like to take part, so I got my two brothers, three sisters and two daughters involved.

“It’s great to be involved in something so unique, and so important, so if there are any people out there who know they were involved in the original tests back when they were in Primary School, I’d advise them to get in touch with the University, it’s well worth it!”