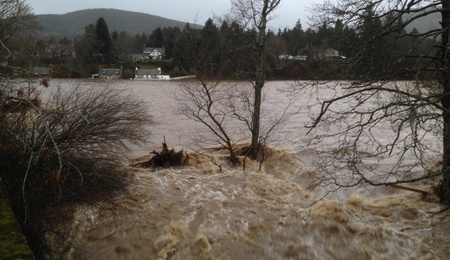 Scientists have launched an appeal to crowdsource information that could help prevent a repeat of damage caused by the recent flooding of the River Dee.

They are asking people who took pictures of the flooding in the area of Aboyne Bridge to send their snaps using the email address deeflood@abdn.ac.uk, so that they can build an accurate picture of how the flood waters caused by Storm Frank built up and drained away.

If successful, this would allow them to create the first ever crowdsourced hydrograph – essentially a plot of the water level through time.

Aboyne Bridge is a major crossing on the Dee, providing a valuable connection between local communities on Deeside.  The bridge was closed as a result of Storm Frank because of ‘scouring’ caused by the flood water, which effectively dug up the ground beneath the structure and damaged  its foundations.

In a bid to try and prevent a repeat occurrence, Dr Clare Bond and Professors John Howell, Rob Butler and Chris Soulsby from the University’s School of Geosciences are working with Aberdeenshire Council and the Scottish Environment Protection Agency (SEPA) as they investigate the causes of flooding in the vicinity of the bridge.

The first step in this process will be to compile images that can help build a timeline for the flooding, as Dr Bond explains:

“What we are aiming to do is produce a hydrograph, which is a plot of water level through time, at Aboyne Bridge,” she said.

“In general the data for these charts come from gauges in monitoring stations along the river, but in order to build the kind of accurate 3D picture we’re looking for we need help from people who took pictures of the flooding as it happened on the morning of December 30th.

“Every photo of the river will carry information on water level that will be useful as long as it retains information on the time and date on which the image was taken, which most smartphones and digital cameras do.”

Our aim is to crowdsource multiple images of the same location at different times. Once we have this information we hope to produce a hydrograph that will provide us with the accurate information we need" Dr Clare Bond, School of Geosciences

“So our aim is to crowdsource multiple images of the same location, but taken at different times. Once we have this information we hope to produce a hydrograph that will provide us with the accurate information we need to work towards a solution.”

Professor Howell continued: “We’re especially keen to find out what happened around narrow points in the river and its floodplain.

“These constrictions can act to hold back water, making the water flow faster and often forcing the river to burst its banks.  Bridges can form these constrictions, and their foundations are threatened by the scouring caused by faster flow.

“Essentially we want to know how the scouring at Aboyne Bridge happened.  Among the questions we’re asking ourselves is whether trees were important in blocking the flow, thereby increasing turbulence and the erosive power of the river.

“To do this we need information on the build-up of floodwater and the difference in water level across the bridge and the causeway approaching the bridge.

“From there our hope is that we would be able to identify potential solutions that could in some way prevent or at least lessen the extent of the damage in future flooding incidents.”

Watch this video for more details:

A dedicated webpage has been created with further information on the Aboyne Bridge Project, where members of the public can contribute images http://abdn.ac.uk/research/deeflood