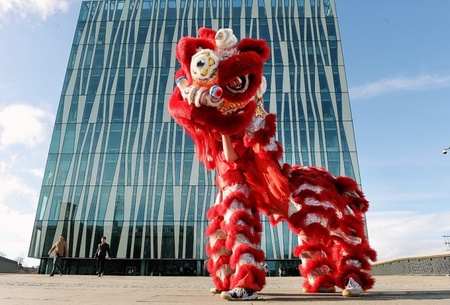 A spectacle of colour will brighten up Old Aberdeen this weekend, as a traditional dragon procession and lion dance helps to mark the start of Chinese New Year at the University of Aberdeen.

The Confucius Institute of the University of Aberdeen is holding a series of events at its King’s College campus on Sunday (February 7) to welcome the Year of the Monkey, including family-friendly activities such as Chinese calligraphy and lantern making.

The majority of activities will be held in the Linklater Rooms by Elphinstone Lawn, starting at 12 noon with a live streaming of the Chinese New Year Gala TV show, one of the most watched TV shows on Earth.

This will be followed at 1pm by a cooking demonstration where visitors will have the opportunity to make traditional Chinese dumplings.

From noon to 3pm there will be activities for all the family including calligraphy, where teachers from the Confucius Institute will be on hand to help visitors write their names in Chinese.

A tai chi demonstration will take place at 3pm, quickly followed by the dragon procession and lion dance which visitors will be invited to follow from Elphinstone Lawn, through the High Street, and back again.

As well as being a celebration of the new lunar year, this is also an opportunity to introduce the wider university community to Chinese traditions, language and culture. " Dr William Tuladhar-Douglas, Director of the University of Aberdeen's Confucius Institute

Celebrations will conclude at the Linklater Rooms with the final countdown to Chinese New Year at 4pm – midnight in China.

“Celebrations at our King’s College campus will culminate in a traditional dragon procession and lion dance that will bring a colourful spectacle to the streets of Old Aberdeen, but there is so much more going on throughout the day to mark the start of the Year of the Monkey, including calligraphy, cooking demonstrations, lantern making and tai chi.

“Not only this, but the following week will see us visit local schools, where we will be supporting special activities and lessons based around the theme of Chinese New Year.

“As well as being a celebration of the new lunar year, this is also an opportunity to introduce the wider university community to Chinese traditions, language and culture.  I would encourage anyone with an interest to come along to King’s College this Sunday and enjoy an authentic Chinese New Year experience.”

Further information, including details on how to register attendance, can be found here https://www.abdn.ac.uk/confucius/events/8445/