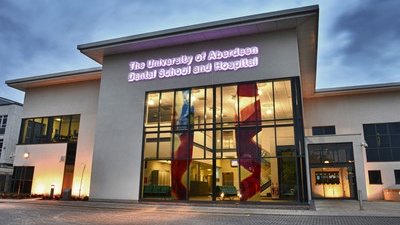 The student who won the right to represent the Aberdeen Dental School at a national skills competition run by Britain's oldest surgical Royal College, has been announced.

Alice Hamilton was victorious in the regional heat of the Dental Skills Competition 2015, run by the Royal College of Surgeons of Edinburgh.

The contest sees final year dental students from across Britain demonstrate their skills in a series of challenges. The competition begins with 16 rounds, one at each UK dental school, during which the students are asked to undertake complex dental work on a mouth mould, which is then anonymously submitted to the assessors who announce the winner.

Alice, 25, was thrilled to win the Aberdeen round.

She said: “I was very happy but surprised to win, everyone in my year has great skills. It's nice for your clinical work to be recognised. It was challenging as I was competing against lots of very skilled people in my year at Aberdeen Dental School but it has helped me refine my skills through practice and self-appraisal as well as boosting my confidence.”

It was challenging as I was competing against lots of very skilled people in my year at Aberdeen Dental School but it has helped me refine my skills through practice and self-appraisal as well as boosting my confidence." Alice Hamilton, Aberdeen dental student

Along with a certificate and trophy, Alice was awarded a travel and accommodation package to compete in the Grand Final in Edinburgh on 10 March 2016. At the Grand Final, the top 16 finalists, from across the UK, will be tasked to undertake a broad range of clinical procedures before determining who will be crowned the overall winner at the Competition’s Grand Final Dinner.

Clare said: "I am proud to have come runner-up, it is definitely an exciting addition to the CV.  Competitions like this are great as they encourage us to perfect our clinical ability and to strive to become an above average dental student.  Recognition of good clinical ability by the Royal College of Surgeons of Edinburgh will hopefully be looked upon favourably by future employers."

Olivier Collet, General Manager of competition sponsors Dentsply UK and Ireland, added: “As dedicated partners to the dental profession and provider of innovative solutions ‘For Better Dentistry’, DENTSPLY has found a natural fit working alongside the Royal College of Surgeons of Edinburgh. The competition promises to be a challenging, yet fun, test of dental clinical skills. By entering the competition, these ‘clinicians of the future’ will see the support that DENTSPLY and the Royal College of Surgeons of Edinburgh can provide to them, at the start of and throughout their clinical careers.”

As well as prizes being awarded to the winner and runner-up, all participants of the competition will receive a certificate of participation, as well as a year’s affiliation to the RCSEd’s Pre-Membership Dental Affiliate Network.