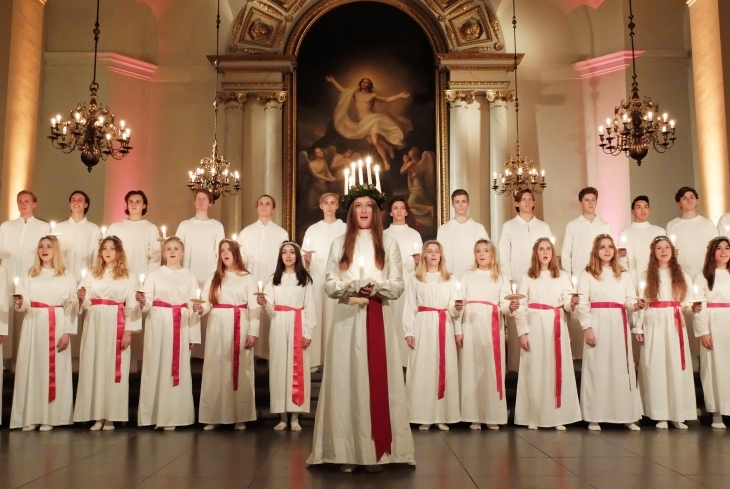 An acclaimed Swedish composer has created the first ever 'Rune Carol' set to words adapted and translated by Dr Hannah Burrows of the University of Aberdeen.

The Christmas carol was inspired by a visit to Aberdeen by the Swedish ambassador early this year where Dr Burrows spoke about her work in Scandinavian studies and translations of Old Norse poetry.

She was then approached to provide the lyrics for the carol, created in conjunction with the Financial Times and performed by Stockholm’s Musikgymnasium choir.

Dr Burrows said the Old Norse poems, with their strong alliteration and sense of rhythm, provided a useful framework for a new carol but that a simple translation was not possible for a ‘festive feel’.

“In the medieval period winter was often portrayed in a very bleak way rather than the more romanticised view we now expect at Christmas,” she said.

“If Christmas is mentioned it is often in the context of how many battles were fought in that period so it doesn’t really convey a festive message.

The Old Norse poems contain some really striking descriptions which I think are quite beautiful. To hear them transformed by music in this way is wonderful and I'm delighted to have contributed to this project." Dr Hannah Burrows

“I was able to identify several appropriate descriptions of winter but they were across four poems written in Old Icelandic Old Norwegian, Old English and Old Swedish.

“I took the best of each of them and combined them, keeping the overall style of the originals.”

Her words were then set to music by composer and pianist Johan Hugosson and the carol was performed for the first time in the grandiose Kungsholms church in Stockholm.

Dr Burrows said she was delighted to hear the final version of the Rune Carol.

“The Old Norse poems contain some really striking descriptions which I think are quite beautiful. To hear them transformed by music in this way is wonderful and I’m delighted to have contributed to this project.

“I didn’t ever think my research would lead to the composition of a new Christmas carol so it has been a real festive treat.”

A performance of the carol can be viewed at www.FT.com/runecarol   and a podcast of the Swedish ambassador, Nicola Clase, talking about the project can be viewed at http://podcast.ft.com/2015/12/01/norse-code-for-christmas/