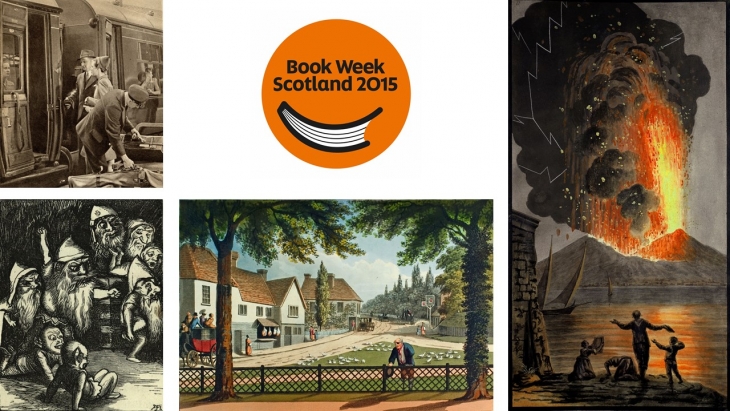 A Mearns school pupil and a teacher from the Borders are the winners of a writing competition inspired by the University of Aberdeen's special collections.

Thirteen-year-old Keri Lewis, who attends Mearns Academy in Laurencekirk was awarded the top prize in the junior section of the annual Flash Fiction competition while Douglas Bruton, an English teacher from West Linton, won in the adult category.

The competition invites budding authors to submit a short story inspired by one of four selected images chosen from the University’s extensive archives.

More than 150 entries were received from across the UK and beyond and in addition to the two overall winners, eight others were given special commendation.

Keri drew her inspiration from an image depicting a volcanic eruption in her work about Pompeii while Douglas drew his creative ideas from a photograph taken from a brochure by the London Midland and Scottish Railway.

The competition was judged by award-winning authors Dr Wayne Price and Caroline Clough with Wayne choosing an adult winner and Caroline selecting the best story from the children’s category. Both winners received book tokens as their prize.

It is the fourth time the Flash Fiction competition has run and Caroline praised the standard of this year’s entries saying: “I felt that both the winner and the runner-up stories were both deep in meaning and showed a maturity in form and content, and the use of language, that would have been exemplary for an adult competition, never mind a junior one.”

Douglas, who has twice before been commended for his entries in the competition, said he was delighted to win the overall title.

“I am so thrilled to be this year's winner: I have entered this competition with some regularity since it began - out of a loyalty to Aberdeen, which I have felt since graduating from University there many years ago,” he added.

“Last year I had two flash pieces specially commended, so to be on the podium this year is not only a step up, but a total thrill”

To read the stories entered for the Flash Fiction competition and the judges’ notes visit https://www.abdn.ac.uk/library/about/special/book-week-scotland/