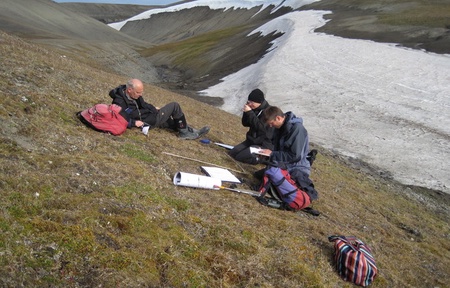 Rene Van der Wal's article in The Conversation looks at why 'the landscape is literally cracking up' with permafrost causing rocks to move and land to slide.

The landscape is literally cracking up. Permafrost causes moving rocks, sliding land and wide crevices. This is the remote island of Edgeøya in the High Arctic, where nature clearly rules. Over the summer, I was part of a team of scientists that made a remarkable discovery here. It could teach us a great deal about how the High Arctic is changing and what it means for the rest of the world.

Edgeøya is part of the Svalbard archipelago. The islands belong to Norway, but have long been important in Dutch culture. The Dutch explorer Willem Barentsz discovered them in 1596. The Norwegians think Barentsz only found what they already knew was there, but their evidence remains disputed.

I first went to Svalbard in 1993 and have returned almost every year since 1997, studying the plant and animal life during the two or three months when the tundra is free of snow. I’ve mostly worked on the western side of Spitsbergen, the biggest and most accessible island. But this year’s visit to Edgeøya retraced the steps of a Dutch expedition who studied it in the 1960s and 1970s. We were part of a unique trip to the islands on a 200-strong icebreaker, the Ortelius, which brought together Dutch scientists, tourists, journalists and artists.

Our nine-day mission was to see what had changed since the previous Dutch expedition. Our small team focused on a valley in the northwest of Edgeøya called Rozenbergdalen. Situated next to a fjord, it is home to reindeer, arctic foxes and pink-footed geese. Walruses laze on the shore and the odd polar bear prowls over a landscape that has been scraped out by ice. These creatures are a spectacle in themselves, but we were here for the plant life.

Our ship was anchored a distance from the shallow shore, so each morning we had to wait until the pack ice had drifted into suitable positions – never mind that it was August. Then team members had to skilfully navigate to the shore in little Zodiac inflatable boats, bumping between lumps of ice, taking care not to disturb walruses, not to mention polar bears. You don’t visit this terrain without a rifle, and if you see a bear you move quickly out of its way.

We were mentally prepared for many surprises, but not concerning the vegetation. We expected only subtle change – the odd new tuft, as it were. We worked from a vegetation map that the former team had painstakingly produced, moving plot by plot, re-recording the presence and abundance of the different plant species.

The results left us more and more confused. The vegetation was radically different. Were we doing something wrong? We knew we couldn’t be all that far out. Twenty metres maybe, but not more. Had the previous crew made serious recording mistakes? Clearly not, since their records had been so thorough. Nothing made sense. We just could not believe our eyes.

After three days, we concluded the inescapable: the vegetation was far more developed than in the past. It was both exciting and bamboozling. In the 1970s this valley had been home to specialists at growing in difficult barren places, which we call pioneer species – treads of purple saxifrage trailing bare soil, occasionally crossing paths with small snow grasses and the likes.

These pioneers had pretty much been replaced by layers of moss several centimetres thick, where taller plants had made themselves comfortable. These ranged from polar willows forming swards 5cm tall to grasses up to 20cm high. From being a place that was only barely vegetated, the balance had been tipped towards a more stable system. Such dramatic changes in a High Arctic system would generally need a very long period of time. More curiously still, we hadn’t seen such rapid conversions elsewhere on Svalbard.

Although still in the dark – just like Edgeøya in winter – we are forming potential explanations. Direct effects of a warming climate seem unlikely as summer temperatures don’t appear to have increased much on the islands as a whole. Winters have become warmer, however, which could have made life easier for plants. Normally Svalbard’s plant-growth season has a rather abrupt start and stop, and can be as little as six weeks – terms like spring and autumn don’t mean much.

If the snow has been melting earlier, the conditions for growth may have carried on longer. Even extending from six to eight weeks is a large change, and fits with the idea of warming in the Arctic as a whole. And the lack of such dramatic changes in the western warmer parts of Svalbard might be because they happened many hundreds of years ago.

Yet climatic changes may not be the whole story. For example seabirds bring in a lot of nutrients from sea to land. We found little auks breeding on cliffs in the valley, and an increase in this charming plankton-eating seabird would almost certainly stimulate plant growth. Likewise pink-footed geese are now much more common there than in the 1970s, and the foraging of this plant eater will also be leaving its traces on the vegetation.

Whatever does explain what has happened, we have been very fortunate to find a system so sensitive to subtle changes. It will help us understand why systems on the edge can change so rapidly, and what it means for the High Arctic as a whole. If we can unlock our mystery, we will be a step closer to understanding one of the most remote regions in the world.