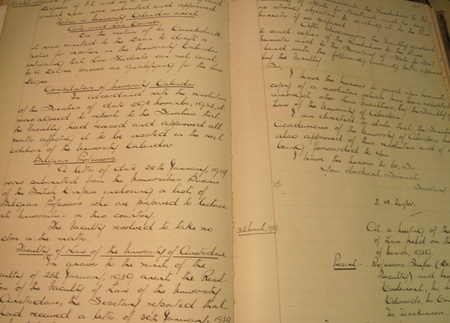 Historical documents unearthed at the University of Aberdeen have revealed the University Law Faculty's opposition to Hitler's Nazi regime leading up to the outbreak of the Second World War.

The documents – which come in the form of hand-written minutes of a series of meetings of the Law Faculty that took place from December 1938 to February 1939 – are the subject of the first ever blog published by the University’s School of Law.

The minutes were contained within leather-bound books uncovered within a storeroom at the University’s King’s College campus, and reveal details of a request sent by the University of Amsterdam to Law Faculties across Europe and the United States, asking for their support in a resolution opposing political, ethnic and religious persecution.

Providing a commentary on the increasingly desperate situation in Europe, the resolution highlighted “with sorrow and dismay” that people were “being persecuted and tormented on account of their faith, race or political convictions” and expressed concern over the use of “so-called concentration camps.”

The Faculty unanimously agreed to support the resolution, and copies were sent to Prime Minister Neville Chamberlain as well as the Herald, Scotsman and Press and Journal, along with a covering letter highlighting the Law Faculty’s support.

Law Lecturer Malcom Combe has studied the documents and used them as the basis for the first ever Law School blog, which has been set up to provide a forum for staff and students to showcase their research and other interesting material.

That the Law Faculty unanimously backed the University of Amsterdam's resolution is extremely heartening, and shows how our tradition of tolerance and freedom of expression was alive and well during this troubling and uncertain time in history. " Malcolm Combe

“Old documents of this nature are always interesting, but these minutes are a truly remarkable,” he said.

“They offer a fascinating account of the concerns that that existed over the persecution of Jews and dissenting political voices in the period leading up to the outbreak of the Second World War.

“While Aberdeen had the North Sea to keep it at a relative distance from Hitler’s gathering military might, the minutes show that the University was by no means inactive in the face of the challenges of the time.

“That the Law Faculty unanimously backed the University of Amsterdam’s resolution is extremely heartening, and shows how our tradition of tolerance and freedom of expression was alive and well during this troubling and uncertain time in history.”

The Law School blog is available to view at https://aberdeenunilaw.wordpress.com/