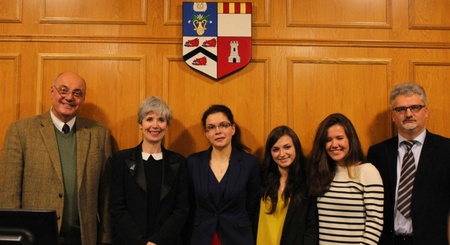 Law students at the University were given insights into the Syrian refugee crisis and current challenges relating to immigration by a leading figure of the Romanian Embassy.

Dr Mihai Delcea, Head of the Consular Office of Romania in Edinburgh, spoke to around 70 students on October 20 as part of an event named EU seen from 3D.

The event, organised by the Romanian Union of Students (RoNUS) and the European Law Students’ Association (ELSA) Aberdeen also heard from the Dr Mátyás Bódig from the University’s School of Law touched on subjects such as free movement, the role played by the EU in the current humanitarian crisis and human rights protection, among others.

Organiser Alexandra Anca Mares said: “We are delighted to have welcomed such a prestigious guest as Dr Delcea to the University who was able to offer unique insights into this topical debate right from the coalface.

“It was also fantastic to hear from Dr Bódig, as a legal theorist who has a long-standing interest in the relation of citizenship to rule of law and complemented Dr Delcea's remarks from the perspective of an academic.”

RoNUS and ELSA hope that everyone enjoyed the event and anticipates that more seminars such as this will follow.