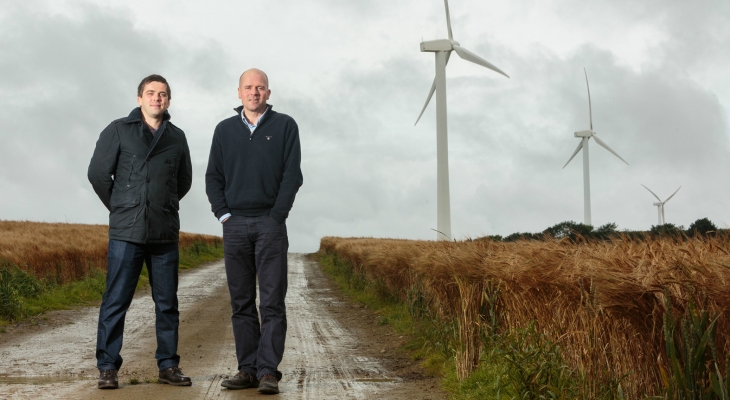 A scholarship left by the late Maitland Mackie to help students study towards the University of Aberdeen's MSc in Renewable Energy Engineering has been awarded for the first time.

David Burr was selected from a strong field of candidates as the first to receive the Maitland and Halldis Mackie Scholarship, which the former University rector and Mackie’s ice cream owner and chairman set up through a £100,000 bequest left in his will.

As an enthusiastic supporter of renewable energy, he established the scholarship to assist talented students like David make an impact in the renewables sector.

By coincidence, the award rekindles a decades-old association between both families, with David’s grandfather Alexander Burr having worked for Maitland’s father – also Maitland - at the Mackie’s Westertown farm in the 1920s.

David, who is from Aberdeen, graduated from the University of Aberdeen with a first-class honours degree in Physics last year, and since then has spent time teaching secondary school classes in renewable, alternative and finite energy sources, while also tutoring maths and physics.

It is his interest in and enthusiasm for renewable energy that saw him selected as the first Maitland and Halldis Mackie Scholar, which he describes as “an honour.”

I am pleased that our parents' scholarship will provide a little help for people like David who may go on to improve and create new energy solutions." Mac Mackie, son of Maitland Mackie

He added: “I have a passion for energy engineering and sustainability and my focus is firmly set on renewable energies and its importance in all aspects of our environment and life.

“Energy integration and storage of renewable energies is an area that is becoming increasingly important as governments aim to reduce carbon emissions, but there are technical challenges that must be overcome if the sector is to fulfil its potential.

“I see the MSc in Renewable Energy Engineering as providing me with the skills I need to address these challenges, and I’m really looking forward to getting started.”

Maitland’s son Mac Mackie, Managing Director of Mackie's, said: “Dad had great faith in the next generation - of people and of technology - and was excited about the global role of renewable energy and emerging development of energy storage solutions.

"I am pleased that our parents’ scholarship will provide a little help for people like David who may go on to improve and create new energy solutions."

Maitland Mackie CBE died in May 2014 aged 76, following a short illness.  His Norwegian-born wife Halldis, with whom he had been married for more than 50 years, died three months earlier.  The couple met at the University of Aberdeen, where Maitland graduated with a degree in Agriculture and then in Economics.  He served several years on the University Senate and was appointed University Rector in March 2012. Maitland’s father – Sir Maitland Mackie – also had a close association with the University, and created a scholarship for students studying Agriculture.