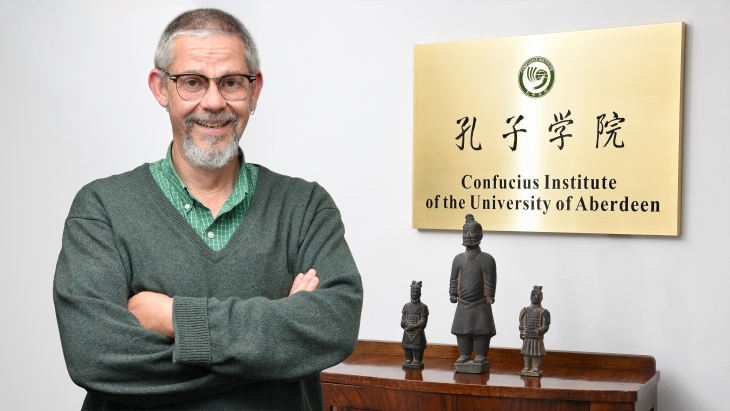 Dr William Tuladhar-Douglas has been appointed as the new Director of the University of Aberdeen's Confucius Institute.

He succeeds Dr Barbara Fennell, who held the post since the University established the Institute in September 2013.

Dr Tuladhar-Douglas is a Senior Lecturer in Environments and Religions in the University’s School of Divinity, History and Philosophy, whose teaching and research interests include Asian languages, Buddhism, anthropology, ethnobiology and ecology.

Commenting on his appointment, he said: “I am thrilled to have been given responsibility for the Confucius Institute, which is a project within the University that I have long supported.

“I have a keen interest in Asian culture and have many years’ experience working there, so to have the chance to connect people and promote connections between Scotland and China is a great opportunity.”

As Director, his immediate priorities will include a programme of cultural events that will take place in September, which will include visits from the Shanghai Opera Company and Wuhan People’s Theatre Company.

He will also welcome a fresh intake of teaching volunteers to the Institute, which will enhance its ability to deliver classes in Mandarin language and Chinese culture to students, schoolchildren, and to the wider community.

Over the long-term, Dr Tuladhar-Douglas is keen to broaden the Institute’s horizons by capitalising on its unique location.

“We’re the furthest north of all the Confucius Institutes in Britain, so by default we’re responsible for a huge geographic area, stretching across the north of Scotland all the way up to Orkney and Shetland,” he explained.

I have a keen interest in Asian culture and have many years' experience working there, so to have the chance to connect people and promote connections between Scotland and China is a great opportunity." Dr William Tuladhar-Douglas

“So we need to think carefully about how we can try to expand what we do in the north of Scotland, and I see this as our biggest challenge over the next five years – to find ways of working with institutions across the region to expand our activities.”

Reflecting on the work of the Institute over the past two years, the new Director highlighted its success in promoting scholastic and cultural links between Aberdeen and China, which has provided a foundation that he intends to build on during his own tenure.

“The Institute has given people the tools to discover cultural, business and research links with China.

“While our main activity is to teach Mandarin language and Chinese culture – and we are very good at that - it is the sense of connectedness that now exists between Aberdeen and China that is the Institute’s greatest achievement.

“In a sense we simply act as a doorway that allows these extraordinary connections to be made, and so long as we keep our door open and a cup of tea on offer then this will continue to happen.”

Welcoming his appointment, Professor Seth Kunin, Vice-Principal for Internationalisation at the University of Aberdeen, said:

“The University’s Confucius Institute has gone from strength to strength since it was first established, thanks in no small part to the efforts of Dr Barbara Fennell, who achieved so much in her time as Director.

“I am delighted that Dr Will Tuladhar-Douglas has been appointed to succeed Barbara, and I’m sure that his fresh and dynamic approach – along with his special interest in Asian culture – will take the Institute to even greater heights.”

The University of Aberdeen’s Confucius Institute aims to provide Chinese language teaching and culture classes and cultural events to the community in the north east of Scotland, including University staff and students, schools, business and industry, and community organisations and individuals.  It also supports classroom teachers in primary and secondary schools where Mandarin is being taught under the Scottish Government’s 1+2 languages policy.