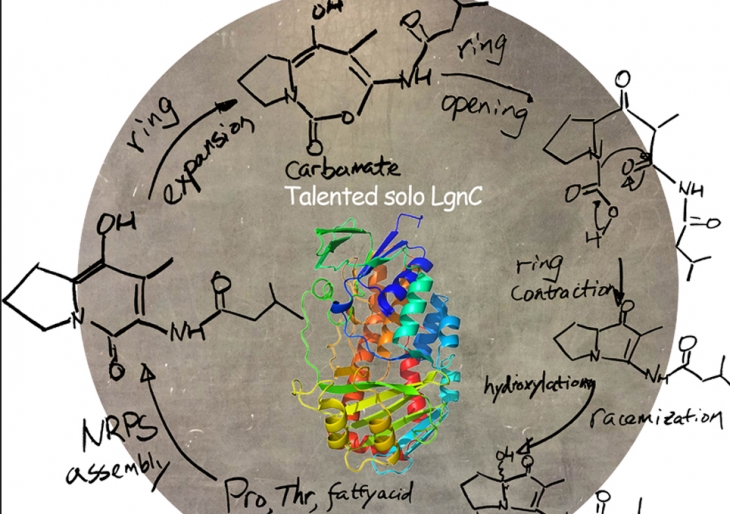 An international research team led by the University of Aberdeen, Wuhan University, China and University of Ghana, Legon, has discovered important new compounds found deep in Ghanaian soil which could unlock our understanding of a group of naturally-occurring chemicals known to have cancer-fighting properties.

Researchers have identified for the first time the compound legonmycins, which they named after the region in Ghana in which it was found.

It belongs to a group of naturally occurring alkaloids based on the structure of pyrrolizidine. Pyrrolizidine alkaloids are produced mainly by plants as a defence mechanism against insect herbivores and have been used by humans since ancient times for therapeutic and recreational purposes.

More recent studies have shown pyrrolizidins to have pharmaceutical importance as anti-tumour agents and as anti-inflammatories but their bio-origins remain poorly understood.

The Aberdeen-led research team, which also involved scientists from Wuhan University in China and the University of Ghana, has taken an important step forward in establishing how and why these compounds occur.

Dr Hai Deng, from the University of Aberdeen, said the benefit of their work, which is published in the top international journal Angewandte Chemie Int. Ed., and featured as the back cover, is two-fold. It  moves on current understanding of this important group of alkaloids - an essential step forward if the full pharmaceutical potential of this material is to be realised,  and the newly discovered compound could itself one day be used in the creation of new drug-like treatments.

“Natural products have been known to have therapeutic benefits for centuries and play an important role in the development of new anti-tumour and anti –inflammatory agents,” said Dr Kwaku Kyeremeh, a lecturer from the chemistry department, University of Ghana. “However, in their natural state they are often toxic to human health or are not potent enough to deliver any advantage.

“It can also be difficult to generate the compounds in sufficient quantities and this is where chemistry and synthetic biology is needed to generate what is known as an ‘analogue’ – a modified version suited to human health.” added Dr Yi Yu, an associate professor from Wuhan University.

Dr Deng further commented: “The generation of these analogues relies first on determining the genome sequence of the compounds and then working out how they can be synthesised.

“We have made a breakthrough in understanding this with the compound we discovered called legonmycins and this has implications for our understanding of other bacterium-derived compounds within this family which are known to have cancer-fighting properties.”

The University of Aberdeen is at the forefront of the hunt for organisms that could one day be used to develop drugs through its Marine Biodiscovery Centre. Experts from Aberdeen have undertaken a range of projects in Ghana, both on land and sea, as the region is one of the least explored in terms of the potential of its natural flora and fauna. They have been working in collaboration with the University of Ghana to build up knowledge and facilities in the country.

Dr Deng said the next stage would be to look at how the ‘code’ they have unravelled in legonmycins can be applied more widely for the generation of potent ‘analogues’ – modified versions of bacterium-based compounds suited to human health -  with the potential to treat diseases like cancer.

“We have been able to pin point how one particular protein acts as a catalyst to make things happen within the molecules of legonmycins,” he added.

“Now we have an understanding of this, we will look to synthesise the process in our laboratories. Once we can do that it opens up the potential to create many other analogues using synthetic biology.

“This is the ultimate goal for this type of research and our current findings are an important step forward in achieving that aim.”