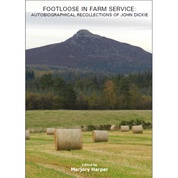 John Dickie was born in Aberdeen in 1824. Five years later the family moved to a croft at Balquhain, in the shadow of Bennachie, and up to the age of 23 his world was contained within a 15-mile radius of Inverurie. An itinerant farm servant, John worked at Harlaw, Thainstone, Daviot, Tarves, Udny and Oldmeldrum until in December 1847 he exchanged the country for the city, when he returned to Aberdeen to marry and take up employment as a warehouseman. He died in 1903.

Throughout his life John Dickie enjoyed dipping his pen in the ink. Some of his efforts were for the benefit of others: on two occasions in the 1860s he petitioned his employers, on behalf of his fellow workers, to request a Saturday half-day and an increase in wages. But his most illuminating piece of work is this unpublished memoir of his early years, which reflects not only his personal rhythms of life and work, but also the impact of regional and national issues on the farming communities of Aberdeenshire.