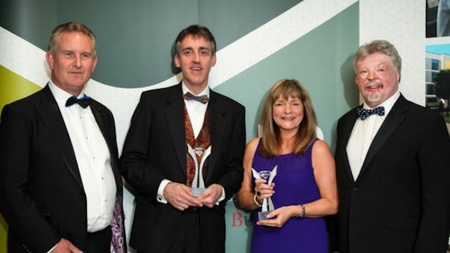 The University triumphed at the CUBO Awards in the Campaign of the Year category, and also the Excellence in Student Sport Experience category, which included some of the best sporting universities in the UK – Loughborough, Bath and Worcester.

It is the first time one University has won two CUBO Awards in the same year.

The sporting award was the result of the University’s Sport and Exercise Team working in partnership with the student Sports Union and Aberdeen Sports Village to offer additional ‘non‐competitive’ exercise opportunities to help students tackle the pressures of student life, by boosting wellbeing. The new timetable of free sport included swimming lessons for beginners, coached ‘fitness swim’ sessions for improvers, coached table tennis and coached netball.

The Campaign of the Year award went to the Directorate of Student Life’s CluedUp initiative– an, integrated student safety campaign which came up with inventive ways to inform and engage with students on wide ranging issues related to safety both on and off campus. Central to the campaign was the development of partnerships with organisations in the local community and beyond, such as Police Scotland, Aberdeen City Council, NHS Scotland and First Bus. As part of the campaign, the team also hosted the first annual Campus Safety Day last October – which the Suzy Lamplugh Trust used as a media case study.

Speaking about the Campaign of the Year award, University of Aberdeen Student Life Director, Leith Forsyth, said: “At Aberdeen, we're committed to giving students not just a first class education but also a rich, positive life experience. With this in mind, CluedUp, an integrated student safety campaign was launched in September 2014.

“The first of its kind in Scotland, the campaign’s objectives are to engage with students on issues related to safety, raise awareness on the importance of staying safe and providing our students with the best possible access to safety information.

“Overall the campaign has positioned the University of Aberdeen as a leader in promoting student safety, placing academic and personal welfare on equal footings.”

Speaking about the Excellence in Student Sport Experience award, Gillian Kerr of the University’s Sport and Exercise team said:  “In 2014 University Sport recognised that two big things were about to happen in Scotland; Glasgow 2014’s XX Commonwealth Games (GCG 2014), and the opening of the new Aberdeen Aquatics Centre, both of which brought a massive boost to the sport of swimming in the North East.

“These two major events gave us an ideal platform on which to base our new physical activity promotion.  Our main aim was to offer another level of sport to encourage as many people as possible to make the most of our state-of-the-art facilities.

“We targeted a wide variety of students and staff with a friendly ‘come and try’ message, giving the opportunity for people to come and learn new skills in a non-competitive environment.

"As a highlight to our campaign, the free swimming lessons – aimed at beginners - were an excellent way to help reinforce that the new facility is not just for our elite users, but for anyone interested in swimming or water sports at any level. Memorably those who took part were some of the very first to use the new swimming pool before it was opened fully to the public.”

“Free Swimming and our other sports enhanced an already busy timetable of sport.  However, one of the main benefits was variety, not just of sports, but entry levels. Our Commonwealth project has confidently promoted physical activity and got people thinking about different ways to become or remain active, learning new skills which they will take with them for life. Feedback has been overwhelmingly positive and we are now looking forward to planning 2015/16.”

About the CUBO Awards

Launched in 2012, the CUBO Awards are a yearly event to recognise the achievements of those working within the higher education industry.

"The CUBO Awards have helped to raise the profile of both winners and entrants among key stakeholders, including Vice-Chancellors and university governing bodies. As the event grows and expands it will contribute to the growth of CUBO as it seeks to extend its networking and knowledge exchange across all UK Higher Education Institutions."