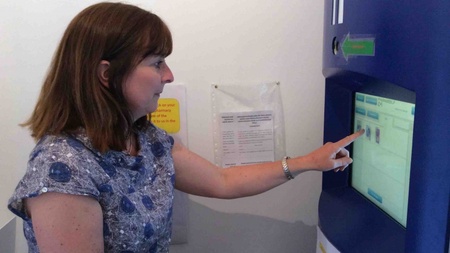 An innovative new robotic 'pharmacy kiosk' is set to revolutionise the way pharmacy services are accessed by people living in remote and rural areas across Scotland.

The kiosk is being trialled in Aberdeenshire, and has been developed as part of a research project led by the University of Aberdeen.

The kiosk allows the user to speak remotely to a pharmacist via webcam and to safely and securely access either dispensed or recommended ‘over the counter’ medicines near to their home.

Part-funded by the Scottish Government, this project has been developed in conjunction with international digital services company Atos, and in partnership with ARX UK, NHS Grampian, the Universities of Glasgow and Edinburgh and Robert Gordon University. The partners believe the technology will feed into and further inform the latest debate around delivering effective healthcare in rural areas.

“The role of the pharmacist and the services they provide has expanded greatly in recent years so in rural areas where it is not financially viable to have a pharmacy, the local community are disadvantaged,” says Professor Christine Bond, Chair in General Practice and Primary Care at the University of Aberdeen.

She adds: “People in rural areas are faced with having to travel further to access a pharmacist and as such there is the risk they may be more likely just to buy medicine without taking advice from a pharmacist.

People in rural areas are faced with having to travel further to access a pharmacist and as such there is the risk they may be more likely just to buy medicine without taking advice from a pharmacist." Professor Christine Bond

“My research is focussed on the safe supply of medicines – both non-prescription and prescription. Originally we were tasked with exploring whether pharmacy services could be supplied remotely via a video link but then we were introduced to Atos and they were able to bring their expertise to the project.”

The kiosk has taken four years to develop at a total project cost of around £150,000 and is currently being trialled in the Aberdeenshire village of Inverallochy, linked to its ‘hub’ pharmacy in nearby Fraserburgh.   In practice, however, the hub pharmacy could be located anywhere in the country.

David Green, Systems Integration Business Director for Atos in Scotland, said the kiosk delivered a viable solution to some of the challenges of healthcare in rural communities.

He says: “This exciting innovation in patient care will extend existing community pharmacy and ePharmacy services and offer the chance to test the kiosk’s potential to provide new additional services which are integrated with existing NHS Scotland systems and services."

As well as being able to speak directly with a pharmacist and collect dispensed medicines, the kiosk also allows users to deposit prescriptions, which can be filled and collected later, and access other standard pharmacy services such as the Minor Ailment Service (MAS). The MAS allows those who are entitled to them to receive Community Pharmacy advice and in some cases receive dispensed prescriptions that would otherwise require a visit to a GP Practice.

Professor Bond added: “This is a research project so the reality of taking the kiosk forward as a viable solution to the needs of rural communities will face a number of hurdles. Having said that, I think there is considerable scope to expand the kind of services and connectivity the kiosk could have so there are challenges, but also opportunities.”