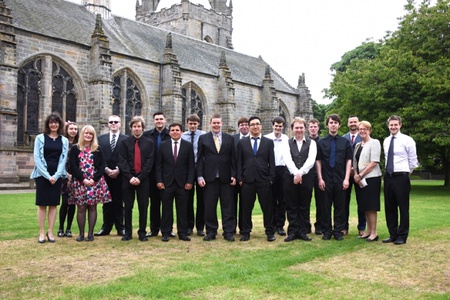 Project SEARCH held its second graduation ceremony last week, at which it was revealed the collaborative project between the University, North East Scotland College and Inspire has achieved the highest employment rate of all the projects in Europe.

The second cohort of interns taking part in the project, which aims to increase the number of people with learning disabilities in employment graduated from the programme, at the University on Friday.

The three Aberdeen partners were initially selected to carry out the project in Session 2013/14 by the Scottish Consortium for Learning Disability (SCLD) which oversees the initiative in Scotland.  The programme is also supported by Aberdeen City Council and Aberdeenshire Council who have funded some of the programme’s resources.

The one-year programme sees 12 Project SEARCH Interns, who are all registered students with North East Scotland College, spending a month in a classroom environment before embarking on a rotation of three work placements in various roles and departments within the University.

In total 11 of the 12 interns who graduated from the first year of the programme in July 2014 are now working in a variety of organisations across the Grampian area and the keynote speaker, Mrs Anne O’Bryan, (Project SEARCH European Programme Specialist) was delighted to announce that Project SEARCH Aberdeen had just been named as achieving the highest employment rate of all the sites in Europe for Session 2013/14.  Anne will receive the award on behalf of the Aberdeen team at the Project SEARCH International Conference in Arizona in the USA later in July.

I am thrilled that our Interns who graduated last year have been able to sustain their employment and are making such positive contributions to their organisations. We are all aware of the challenges facing everyone seeking employment today due to the current economic climate, and I am delighted that some of our Interns are already in work." Professor Neva Haites

The first of the second  cohort have already secured employment and a ‘Jobs Club’ will start next week in the Project SEARCH Classroom, King’s Pavilion, to provide additional support to those still seeking work during the summer break.

Professor Neva Haites said: “I am personally very proud to have been involved in this inspiring initiative and congratulate everyone involved in the project on the tremendous achievements they have made.  I am thrilled that our Interns who graduated last year have been able to sustain their employment and are making such positive contributions to their organisations.  We are all aware of the challenges facing everyone seeking employment today due to the current economic climate, and I am delighted that some of our Interns are already in work. I am sure that our Interns who leave us today will continue to be the same fantastic Ambassadors for the programme that their predecessors have been and I look forward to welcoming our third group of Interns in September.”

Michael Robb one of the Project SEARCH interns, added: “When I finished college  I felt like I wasn’t confident enough or lacked something important that was needed for me to get the job and one of my friends told me about a course called Project SEARCH.  Now that I have completed the Project SEARCH programme I feel so much more confident and ready for the working world”.

Project Tutor, Andrew Thomson, added: "The distance travelled by these young people during the year is really quite astonishing; they are now ready to enter the working world having gained over 800 hours of work experience and would be of great benefit to an employer due to the skills and hardworking attitudes they have so successfully demonstrated during the programme.  It has been a genuine pleasure to work with such a great group and I think I speak for all the people involved in the programme when I wish them all the best with their next steps into work.”